Tan Baoshu was charged with rash act causing death, while six other SAF servicemen who were involved in the incident have been referred to the Ministry of Defence (Mindef) for investigations, said a police statement on Wednesday.

If convicted, Tan, 30, could be jailed for up to five years, or fined, or both.

Details of Tan's designation and his involvement in the case were not revealed.

CFC Lee, 19, from the 1st Battalion Singapore Guards, suffered a heatstroke after completing a fast march in Bedok Camp on April 18.

He died on April 30, two weeks after he was admitted to Changi General Hospital.

A Committee of Inquiry (COI) was convened by the Armed Forces Council on May 2 to investigate the circumstances leading to the incident, while the police also conducted independent investigations. 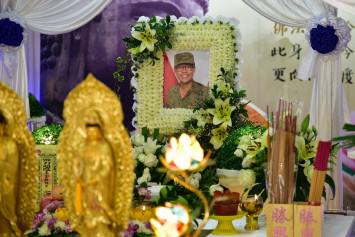 Two of the six referred to Mindef are regular servicemen, while four are national servicemen, it said.

Mindef said: "SAF personnel who conduct unauthorised activities, or who wilfully or negligently fail to comply with training safety regulations, will be severely dealt with and prosecuted under military law... or under criminal law before the civil courts."

In August, Defence Minister Ng Eng Hen told Parliament that relevant persons involved in the incident have been removed from command and could face criminal charge or military prosecution.

However, no evidence of foul play or medical negligence was found, he said then.

The Attorney-General's Chambers (AGC) has, in the past, referred servicemen to the SAF to be prosecuted under military law when it found insufficient grounds for prosecution in the criminal courts.

In 2012, after Private Dominique Sarron Lee Rui Feng died due to an allergic reaction following the use of smoke grenades in training, the AGC decided not to prosecute anyone, as the coroner found that the reaction was unlikely to have been predicted, among other findings.

However, two SAF officers involved were charged under military law in November 2013 for breaching safety regulations following the AGC's decision not to prosecute.

In 2006, the AGC also referred a case where four instructors were involved in a drowning incident to Mindef for "action under military law". Second Sergeant Ong Jia Hui died on June 15, 2005, after he sank 9m to the bottom of the sea in the waters off Changi Naval Base while on a military exercise.

The AGC found no legal grounds for proceeding against the four servicemen on criminal charges. Mindef said it would conduct further investigations before deciding if the soldiers will face a court martial.

In another incident, a company sergeant major involved in a case in 2011, where a lance corporal was killed when a truck reversed into him, also evaded prosecution by the AGC, but was later charged and fined under military law.