SINGAPORE - Plans to demolish the Merlion statue on Sentosa to make way for a new corridor linking the north and south of the island has upset some Singaporeans who hold nostalgic memories of the towering statue.

Experts, however, say that a major revamp of Sentosa is sorely needed and the redevelopment, along with that of adjacent island Pulau Brani, could help to boost Sentosa's appeal.

The two islands will be reshaped in line with plans for the mainland, with the aim of branding the whole area the Southern Gateway of Asia.

But some people lament the demolition of the Sentosa Merlion, the largest of the seven Merlion statues in Singapore, which has towered over Sentosa for 24 years. They recall its nightly laser shows and the views from within the 37m-tall structure. 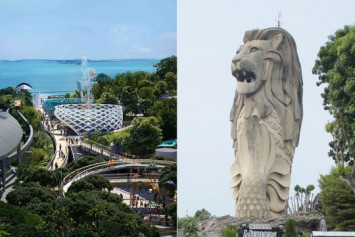 Consultant Colin Tan, 32, has fond memories of visiting the attraction on a school trip. "I wish they could build around it or preserve it in some way. There are other Merlions, but which other one can shoot lasers (from) its eyes?" Mr Tan told The Straits Times.

Student Joven Ang, 18, said: "The Merlion there represents Sentosa island, allowing Singaporeans to have a sense of belonging, and without it, it would kind of be meaningless, even if there are many attractions built."

While the Merlion may be iconic to many, some experts say Sentosa needs new attractions to keep the visitors coming.

"It's a pity that the Merlion couldn't fit into the plans, there is a sense of loss. But it is also a bit dated and run down," said Dr Michael Chiam, senior tourism lecturer at Ngee Ann Polytechnic.

He pointed out that the master plan, details of which were announced on Friday (Sept 20), marks the first major overhaul of Sentosa since it was developed as a resort island in the 1970s.

"It needs something to get people excited, because now after going once or twice, they most probably won't want to go again," he said.

The development of Pulau Brani will likely boost visitorship to Sentosa and Resorts World Sentosa (RWS), Dr Chiam said, adding that the plans may give RWS an edge over its competitor Marina Bay Sands (MBS) with business travellers.

Read Also
Which of Singapore's 7 Merlions is the most expensive? 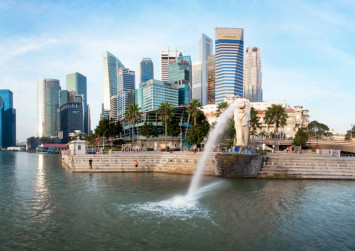 "Most of the Mice (meetings, incentives, conventions and exhibitions) organisers look at the sightseeing and recreational component as well. So if you combine all these enhancements on the two islands, it may have a bigger offering than MBS," he said.

Associate Professor Sing Tien Foo, director of the National University of Singapore's Institute of Real Estate and Urban Studies, said that developing the two islands holistically provides the opportunity for bigger projects, and linking them can create the feel of having "one big island".

The two islands will be divided into five zones that will take on a more leisurely character the farther they are from the city, according to Sentosa Development Corporation (SDC).

Having zones with different themes will minimise duplication across clusters and cater to different groups more easily, Prof Sing pointed out.

The Sensoryscape, a double-level walkway that will connect the mainland-facing RWS to beaches on the south of Sentosa, will serve as an important spine to link larger areas, he said.

The Sentosa Boardwalk, for example, connects RWS with VivoCity, and walking trails could also be built between the two islands and Mount Faber.

Prof Sing noted, however, that as the Pulau Brani master plan will be implemented over the next two to three decades, much is likely to change.

One consideration in the long term is rising sea levels.

"If it isn't planned properly, the beaches will all be underwater. One option is to cordon off part of the seafront," he said.

The Singapore Tourism Board said on Friday that the redevelopment of the two islands forms an integral part of Singapore's efforts to rejuvenate its leisure offerings and maintain its appeal.

While the construction of the Sensoryscape entails the closure of the popular Merlion attraction, "we are confident that both locals and visitors will have more to look forward to on Sentosa in the coming years when the five distinct zones are completed", it said.

One Faber Group, which operates the Sentosa Merlion, said on Friday that it will be hosting a special edition of its light and sound show, among other activities that will run until the last day of operations on Oct 20.

Singaporeans and permanent residents will enjoy half-priced admission tickets, while those aged 60 and above can enter the attraction for free.