A violent slashing at a coffee shop on Sunday (Nov 14) led to an extensive manhunt for two men who had just been released from the Reformative Training Centre.

The suspected secret society members, aged 18 and 21, are alleged to have wielded long knives and slashed a 37-year-old man at a coffee shop in Depot Road at around 9.35pm.

The police said witnesses saw them slashing and stabbing the victim, leaving him with multiple cuts and stab wounds to his head, neck, knee and chest.

The victim was taken to hospital with multiple injuries and was bleeding profusely.

The alleged assailants had fled and disposed of their weapons before police arrived at the scene.

In a press release on Wednesday morning (Nov 17), the police said they had mounted an extensive manhunt for the men, who had allegedly cut their electronic tags to avoid tracking of their whereabouts.

But the police managed to find and arrest them at a hotel on Sentosa at around 4.45pm on Monday (Nov 15), within some 20 hours of the violent assault.

A 30cm knife was found in vegetation near the coffee shop. 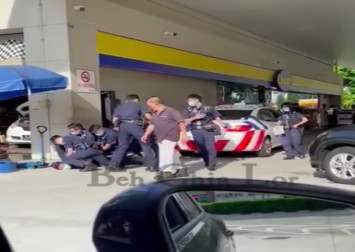 The two men are expected to be charged in court on Wednesday with voluntarily causing grievous hurt by dangerous weapon.

Separately, officers arrested three other men aged 19, 20 and 28 for being suspected members of unlawful societies.

The older two are believed to have met up with the two men allegedly involved in the Depot Road slashing after the incident.

Police are investigating their alleged involvement in the assault.

Witnesses to the attack had described it sounding as though the men were chopping meat at a market, reported Shin Min Daily News.

The witnesses told the Chinese evening daily that the assailants had chased the victim some 200 metres from where a wedding had purportedly been taking place.

The police advised members of the public to steer clear of secret society activities and to report those who engage in such activities.

Those convicted of voluntarily causing grievous hurt with a dangerous weapon may be jailed for life, or up to 15 years with a fine and caning.

Those found to be guilty of being a member of an unlawful society may be jailed for up to three years and fined up to $5,000.