Depressed mum sought help before killing autistic son and herself

The body of Madam Nami Ogata's older son Sotaro was found in a car in Lorong Sesuai in Bukit Batok. Madam Nami's body was found at the bottom of a slope.

She found it hard to cope with work as well as taking care of her two young sons at home.

Her older boy Sotaro, especially, was a source of concern and stress as he had attention deficit hyperactivity disorder and autism, and was doing poorly in school.

Then, on the morning of Nov 14 last year, the Japanese national strangled Sotaro, then five, put his body in a car and drove to a secluded spot on a hilltop in Bukit Batok, where she stabbed herself to death.

In her findings, which were released yesterday, the coroner said Madam Nami had made preparations to carry out a series of acts, clearly intending their tragic consequences.

On Nov 11, three days before her death, Madam Nami told a doctor about her stress. She also saw a psychiatrist in the same clinic and revealed that she was depressed with suicidal thoughts.

When she was referred to Singapore General Hospital, she was found to be of low risk of suicide and given insomnia medication.

The next day, she saw another psychiatrist and was diagnosed with major depressive disorder and given more medicine. 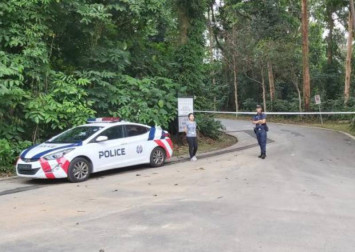 She told him she had briefly thought of suicide the week before but had not made preparations and would not harm herself on account of her children.

Madam Nami and Sotaro were last seen alive by their domestic helper at 9pm on Nov 13.

She was reading storybooks to her sons and slept with them in their room. The helper said she did not hear unusual sounds or commotions that night.

At 6.10am the next day, the helper woke up to find Madam Nami and Sotaro missing. She then saw a message from Madam Nami that she was taking her son to the hospital.

But investigations indicated that Madam Nami had strangled her older son in the living room of their condominium unit in Bukit Timah using a long elasticated band with three knots and a raffia string with tape.

Madam Nami then left home with Sotaro's body, which she covered with a white blanket.

This was likely to hide the ligature marks on the boy's neck, said the coroner. She also took along a kitchen knife.

Madam Nami drove out of the condo at 5.40am and arrived in Lorong Sesuai in Bukit Batok 10 minutes later.

She drove off but returned a few minutes later, going past the Bukit Batok Transmission Station (BBTS) and stopping at a grass verge near lamp post 15.

After turning off the engine, she alighted, walked into the forested area next to the car and stabbed herself with the knife.

At 6.20am, two auxiliary police officers stationed at BBTS saw the car and went to check on it. They saw Sotaro's body on the backseat. Thinking he was asleep, one of them knocked on the door to wake him. When he did not respond, the officer called the police.

A bloodstained knife with an 18cm blade was found a metre from her body. The mother and son were pronounced dead at about 7.40am and 7.20am respectively.

Madam Nami's husband, Mr Ogato Tomoaki, was in China on a business trip and last spoke to her on Nov 10. He had not sensed anything unusual.

He said she loved their children and had never been violent with them. It was only when he came back that he found a letter saying she had depression.

In the note to her husband, Madam Nami said her medication did not work.

State Coroner Kamala said: "She worried that if she were to collapse, there would be no one to care for the children. She apologised for her actions."

Madam Nami also repeatedly asked her husband to take care of their younger son and left specific instructions for his development, care and custody.

In her second note addressed to her brother in Japan, she pleaded with him to take the younger boy into his custody and to raise him together with his children. She also informed him of the financial arrangements she had made for the boy's future expenses.