Despite travelling the world, Nas Daily has few friends

For someone who has visited between 55 and 60 countries in 1,000 days, he does not have many friends.

That is what popular Israeli travel video blogger Nas Daily told The New Paper yesterday when he landed at Changi Airport Terminal 2 with girlfriend and fellow video blogger, Alyne Tamir.

Nuseir Yassin, popularly known as Nas, had said on March 20 that he and his company, Nas Daily Corporation, would be moving to Singapore to set up a new company, the Nas Daily Media Company.

The New Paper greeted them when they were at the arrival hall after a 20-hour journey.

On making friends, Nas told TNP: "We have a few friends here, but I'm here to be friends with the people that I work with, and if we work together well then we are going to be best friends."

Alyne told TNP she was worried about assimilating into the Singaporean community.

She said: "I'm a traveller. I don't really stick to one place. So I wonder how easy it will be to create deep friendships.

"Especially since my boyfriend is who he is, I can't help but wonder if people are just excited to hang out with him or if we actually have a connection.

"But even if he was not here and I was just a normal tourist, I may have issues relating with Singaporeans because Singaporeans have experiences and upbringing different from my own."

Alyne described Nas as very work-driven and said he is so focused on work he does not really care about his social life.

Nas and Alyne will be staying at Winsland Serviced Suites by Lanson Place near Somerset MRT. 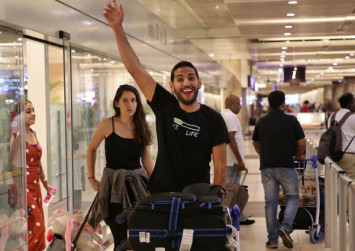 It will act as both home and office until they purchase a house, assisted by 99.co, an online service that helps users find homes for sale and for rent in Singapore.

Nas and his team, who gained popularity online by posting one-minute videos on the Facebook page Nas Daily, plan on exploring and creating content about South-east Asian countries. These include Vietnam and Indonesia, with Singapore as their base of operations.

On Saturday, he will be hosting his second meet-up event in Singapore at 4pm at the Singapore Botanic Gardens' Eco-Lake.

As of 8pm last night, the event page on Facebook had garnered 2,900 "going" clicks and another 9,300 "interested" clicks.

According to the page, attendees can expect comedy, content creators, a section on social media, T-shirts and memes.

This blew my mind. I hope it blows yours. For the past 50 years, people in Singapore have been trying to recycle water,...

Nas said he is looking forward to his stay here and will be here for at least seven months each year.

He added: "I'm also excited to see the zoo, but I don't want to sound like a tourist because I'm here to explore how to make a sustainable company."