A man was spotted throwing joss paper into the air in Bedok at midnight when the Hungry Ghost Festival began.

As the seventh lunar month begins today (July 29), most of us will expect to see pieces of joss paper strewn around public places.

This phenomenon has once again become a heated topic among some Singaporeans as a video of a man "distributing" joss paper at the stroke of midnight makes its rounds on the internet.

The five-second TikTok video posted by Sgviralvids showed a man tossing joss paper onto a road in Bedok with a caption that read:  "Hungry ghost festival is here...".

While some netizens appeared to have no issue with the man's actions — saying that his beliefs should be respected — others brought up more practical concerns, such as the extra work required to clean up after him.

"Pity the cleaners...need to do extra jobs," remarked one netizen.

There were also some others who wondered if the authorities would take action against the man.

To combat the issue during the seventh month, an Alliance for Action on Norms for Joss Paper Burning was announced two weeks ago.

Comprising of representatives from more than 10 Chinese religious, cultural and industry associations, the alliance hopes to convey to the Chinese public the correct way of burning joss paper.

This means burning only three to four pieces at a time, and not throwing whole stacks of them into burners or tossing them into the air.

In addition, the alliance also recommends that devotees clear their prayer items and offerings at public places after rituals to keep the environment clean.

Something from the movies?

The act of throwing joss paper into the air also has little relevance to Taoist and Buddhist traditions, and may just be a practice inspired by the movies.

"There are very few people who do this. Maybe some throw a small amount of joss paper during funeral processions... Perhaps the quality of life is better now, and joss paper is better and more affordable, so people toss larger quantities [of it]." 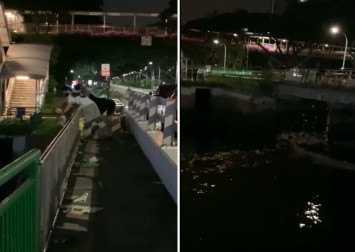 However, he pointed out that it's not very logical to do so.

"Some of it is tossed [into the air] and some of it is burnt, so does the deceased received those that are tossed or burnt? If [the dead] can receive it by tossing then there's no need to burn, and vice versa, right?"

When it comes to the amount of joss paper that one should burn, more doesn't necessarily mean better.

"From a Taoist perspective, when we ask our ancestors for something, we need to repay them. That's why we burn joss paper to express gratitude to the gods and the deceased," Master Benjamin Tan from the Singapore Taoist Federation told Zaobao.

"What matters is one's sincerity. When we burn joss paper, merit is earned when one prays and gives thanks. We've always asked believers to burn joss paper in moderation."

ALSO READ: Hungry Ghost Festival 101: What you die-die must know