No one likes seeing a dirty table at a food court or restaurant, so imagine how appalled this man was when he came across one such table at a void deck.

On Tuesday (June 8), local content creator Hafidz Rahman, who goes by the handle @asonofapeach, took to Twitter and TikTok to rant about his nauseating find – which got more than 90,000 views and 1,000 retweets respectively.

"You imagine waking up in the morning and you see this," he tweeted with an accompanying photo that shows said void deck table tainted with a pool of curry and an unfinished packet of food.

Hafidz says that altogether, there were three opened packets of unfinished rice, a half-eaten prata and a packet of gravy that had "curry trickling at the edge of the table".

He threw away the packets of rice but was unable to clean up the remaining mess – with no tissues on hand.

While Hafidz acknowledged that some have resorted to eating at void decks due to the restrictions from Phase 2 (Heightened Alert), he said it was only appropriate that people discard their uneaten food once they were done.

He also added that eventually cleaners have to shoulder the consequences of such inconsiderate acts.

"Some town councils are already working on a minimum headcount because of Covid, now you make them work more than they should, with the same pay," he said.

He also posted a video on TikTok with the caption "3am rant. Do f***ing better lah, Singaporeans" where some netizens chimed in their own experiences. 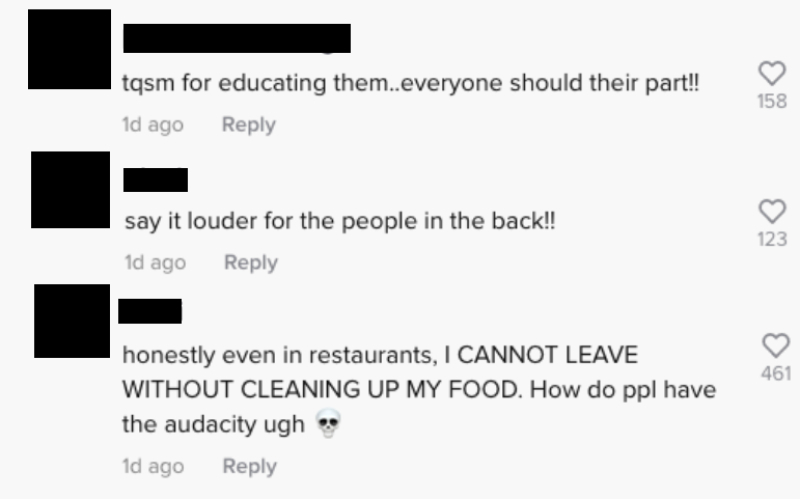 The incident comes after the National Environment Agency (NEA)'s recent announcement that it will be mandatory for diners to clear their tables after food consumption.

First-time offenders will be given a written warning and subsequent offenders can face court fines that can go up to $2000 for the first conviction.

While enforcements will only kick in on Sept 1, there will be a three-month advisory period from June 1 to Aug 31 for Singaporeans to adjust to the rules.