'Do they have a better solution?' Shanmugam says foreign opposition to death penalty limited as compared to local support

Home Affairs and Law Minister K. Shanmugam noted that Singapore makes a distinction in its drug policy between drug abusers and traffickers.

There is strong support for the death penalty in Singapore and international criticism of it is overstated, Home Affairs and Law Minister K. Shanmugam has said in an interview.

In fact, a survey conducted in the region indicates that capital punishment has been a strong deterrent for would-be traffickers, showing that the country's tough stance against narcotics saves lives, he added.

Mr Shanmugam was speaking about the country's drug laws and Section 377A of the Penal Code, among other things, in an interview with The Sydney Morning Herald. The Ministry of Home Affairs released the transcript of the interview on Monday (Sept 19).

The recent executions of several drug traffickers in Singapore have drawn criticisms from death penalty activists as well as the UN special rapporteurs and the European Union.

Asked about this, Mr Shanmugam said: "Four or five newspaper articles quoting the same three or four activists does not amount to international pressure."

He added: "Internationally, there are some statements issued by UN special rapporteurs, and you have some articles, nothing beyond that. The European Union has an ideological focus on the death penalty, but I would like to ask them if they have a better solution."

He noted that the Netherlands has been described as a narco state by the chief of the largest police union in the country, and in Sweden, drug-related gang violence has become a major election issue.

"Nobody talks about this. What about the victims of the crime? So, when the European Union is able to tell us there is a better solution, we will listen," he added.

A case that had brought attention to the death penalty had been that of Malaysian drug trafficker Nagaenthran K. Dharmalingam. Some had criticised Singapore for hanging him on April 27 for smuggling 42.72g of heroin into the country, arguing that his IQ of 69 makes him intellectually disabled.

Mr Shanmugam said while Nagaenthran's IQ was lower than the average person's, psychiatrists who saw him did not assess him to be intellectually disabled.

He added that the law looks at whether an offender knew what he was doing, and the courts found that Nagaenthran had known and was creating excuses and finding new ways of trying to explain away his conduct.

Mr Shanmugam also suggested that Singapore was being held to a higher standard, noting that the US had not been asked similar questions about the execution of two men with IQs in the range of 70 to 90 in October 2021.

"Has anyone raised an eyebrow when the US executed at the same time last year in October, two others with the same IQ, and the US courts dismissed the same arguments because the fact that you have a low IQ by itself is not the main point in law," he said.

He added that multiple domestic surveys have also shown that more than 80 per cent of Singaporeans agree with the hanging of drug traffickers.

And a survey commissioned in the region found that those outside Singapore are deterred by it.

Those polled were primarily in areas from which drug traffickers to Singapore come from, and 83 per cent said the death penalty is very effective and 69 per cent said it is more effective than life imprisonment.

About 80 per cent said it would make them not want to commit serious crimes in Singapore.

"If we removed it, many more will traffic. There is no doubt about that."

On the criticism that Singapore was nabbing only the low-level drug mules and not the big-time kingpins, Mr Shanmugam said that was because the "big guys won't come to Singapore for good reasons".

He added that Singapore cannot just exclude traffickers or any special categories of people from the law, as this would encourage the kingpins to recruit such people as mules to send into the country.

"If I say I don't catch traffickers and I wait for the kingpins, basically my drug policy will be out of the window," he said.

Singapore also makes a distinction in its drug policy between drug abusers and traffickers, he said.

While drug abuse is a crime, abusers are not treated merely as criminals and a lot more emphasis is put on rehabilitation and helping them, he added.

"They are treated as people who need medical help, the family, the community, religious organisations are brought in," he said. 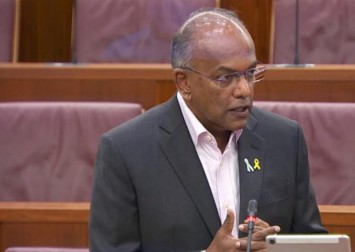 During the interview, he was also asked if Singapore's plan to amend the Constitution to protect the definition of marriage from legal challenges when Section 377A is repealed, would make same-sex marriages harder to achieve.

Disagreeing, Mr Shanmugam said Parliament would still be able to change the definition of marriage with just a simple majority, and the change merely ensures that such a policy issue is decided in Parliament, as it should be.

"In many places, Parliaments duck the issue and let the courts deal with it because nobody wants to touch this," he said.

Even within the Anglican Church, there are disagreements among the churches of different countries on how homosexuality and same-sex marriages should be viewed, he added, noting how the issue is so emotive that it has torn apart many societies and even the Church.

Given that Singapore is considered one of the most religiously diverse places in the world, it was all the more important for the Government to do something, he said.

Mr Shanmugam added: "You, as a government, cannot always just be behind your population. You have the duty to lead, but you also can't be too far ahead. And you've got to keep social harmony, so that's what we're trying to do.

"So, we know that on 377A, we have to take the leading step. At the same time, our sense is the mainstream of society is not ready to see very substantial changes and other things. And we want to assure them that all the other things, marriage and the benefits that come from being married and so on will remain the same. We will not see change in the tone of society overnight. And that these matters will be the problems of Parliament."