With just a phone in hand, anyone can record acts of misdeeds with just a simple tap, but not everyone's attempt at being a vigilante has sat well with the public.

A man's attempt to shame an elderly woman for not wearing a mask backfired on him after netizens accused him of needlessly provoking her.

In a video uploaded onto Facebook on Wednesday (May 20), a woman was seen hobbling to her personal mobility aid (PMA) at a corner of Commonwealth Crescent Market and Food Centre when the cameraman approached her.

Throughout the minute-long clip, the cameraman could be heard criticising the woman in rapid-fire Hokkien for not wearing a mask. The woman swore back at him and refused to comply, climbing onto her PMA as she did so.

Despite her attempt to turn the PMA around and leave the situation, the cameraman circled around her and continued scolding her.

As he swore at her, she picked up a nearby broom and held it up threateningly.

Before she could get within reach of him, the cameraman yelled out loud: "You see this auntie! Never wear mask still want to use the [broom]!" 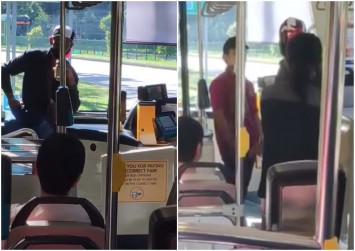 Though his video has since gone viral, it wasn't for the reasons he had expected.

Many called him out for being a "big fat tattle-tale" and uploading an incomplete story.

One questioned: "There's no context of why the auntie doesn't have a mask, if it broke or she forgot?"

They questioned the need for speaking to the woman in such a harsh manner and suggested showing some empathy by politely offering a mask to her instead.

"Don't be a hero if you cannot control your anger. You are not helping the community."

Mask wearing was made mandatory since April last year, and remains mandatory so as to stem the spread of Covid-19 and to keep the number of infections down.

Oh their website, the Ministry of Health adds that masks should "closely and completely cover the nose and mouth".