'Don't disturb nature': Netizens reproach woman after she saves duck from being eaten by snake in Bukit Timah

A woman in a pink blouse is seen tossing a stick at a snake stalking a duck.

Sometimes, it might just be better to let nature take its course.

In a video posted to TikTok on Sunday (May 8), a user by the name of Sister Ma was on a hiking trip with her family at Bukit Timah Hill when she encountered a large snake, which looks like a python, in a drain creeping up on an unsuspecting duck.

Before the duck could become the snake's next meal, however, a woman in a pink blouse stepped towards the drain and began throwing sticks at the snake to scare it away.

"Yes, hit the snake," the person recording, presumably Sister Ma, could be heard shouting in Mandarin. "It's fine as long as you hit the snake!"

Likely deterred, the snake turned around and slithered away from the duck.

"Okay, good!" the TikTok user could be heard saying repeatedly. "The duck has been saved!"

Although Sister Ma and her family only wanted to save the duck, their act, seemingly with the best of intentions, generated plenty of ire from her viewers.

In the same vein, another user warned: "Don't disturb nature!" while one other user posted: "Snakes also need to eat… this is the natural environment."

Other TikTok users felt that there was a tinge of hypocrisy in Sister Ma's beliefs.

"After their hike, their lunch will be roasted duck rice," one user humorously commented. 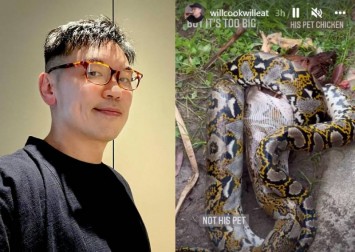 In response to comments on her TikTok video, Sister Ma countered that her family had buns after their hike.

On its website, NParks has warned the public against approaching or handling snakes in the wild. Pets should also be kept on a tight leash in case they chase or frighten the snake.

NParks recommends contacting them at 1800-476-1600 should anyone require assistance with snakes.