While he called for a focus on the "true spirit of learning", Education Minister Ong Ye Kung admitted yesterday his relief that there was no "uproar" from parents after the Ministry of Education (MOE) announced a slew of changes last week to be introduced over the next three years.

These included fewer mid-year exams, no more class rankings and two test-free years for children when they start primary school.

Speaking yesterday at the triennial Singapore International TVET (Technical and Vocational Education and Training) Conference at Raffles City Convention Centre, Mr Ong delivered a progress report on SkillsFuture, launched in 2015 to promote lifelong learning here and elaborated on why the changes were necessary.

He reasserted his belief that Singaporeans have become "over-reliant" on examinations, and said: "Examinations have become such a comfortable security blanket that a large part of the education experience revolves around examinations.

"As a system and society, we have been over-reliant on this security blanket.

"Before it smothers us, we need to start to withdraw it somewhat and focus on the true spirit of learning."

Mr Ong stressed there will be no reduction in rigour in the education system as the changes do not mean there is less or no need to study, pointing out that schools will have about three more weeks of curriculum time every two school years.

He also urged tuition centres not to simulate exam-like conditions as replacement for the lost exams, because "doing so would just be preying on the apprehension and anxieties of parents and students".

While the centres and private tutors may have to tweak how they teach after the recent MOE announcement, educators believe the changes will not affect their popularity, for the near future at least.

Speaking to The New Paper yesterday, Ms May Choong, centre manager for EduFirst Learning Centre, pointed out that though exams for Primary 1 pupils were removed in 2010, there has still been demand for tuition for Primary 1 pupils, with children as young as four taking classes at EduFirst.

Said Ms Choong: "The demand is still high for pre-schoolers as well as lower primary.

"Parents see the need to give their child a head start because they are looking at the longer term, such as exams like the Primary School Leaving Examination and O levels, and not just exams at certain levels."

She added: "Singapore has been a crazy tuition nation for the past two decades. I don't think one announcement can remove this mindset instantly."

A coordinator for a home private tutor agency, who wanted to be known only as Madam Neo, said the trend of enrolling children into tuition classes - even those with good grades - has been in place for many years.

Madam Neo, who connects parents with private tutors, said: "Tuition is something that is so ingrained in our culture. To change this mindset, we need to educate the next generation.

"Tuition centres now have all sorts of education camps for all levels. The older generations did not have any of these, and we all turned out fine."

However, Madam Calla Chiang, director of Science Studios Learning Centre, believes she has observed a mindset change in parents, slowly but surely.

Read Also
'Learning is not a competition': No more 1st, 2nd or last in class for primary and secondary students 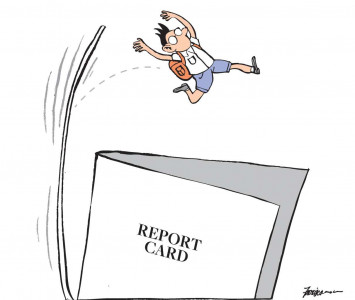 Her centre focuses on using a hands-on approach to teach science to children between Primary 3 and 6, and it has seen an increase in demand for classes since 2015.

She said: "There is a certain rigour in science, but parents are starting to see the need for learning to be fun and engaging."

Mr Ong yesterday urged tuition centres to try to understand why the "changes are important to better prepare our young for the future and help explain that to parents".

And with more time freed up in school, he had a message for students.

Mr Ong said: "We will use this time to teach you better, so that you can learn better, because teachers don't have to rush through the curriculum in order to prepare for examinations.

"So take this opportunity to study well and enjoy school and learning more."