Drama in the heartlands: 5 undercover policemen pin down suspected loanshark runner at Sembawang

In a scene reminiscent of a cop drama, five plainclothes policemen dashed out of nowhere in the rain, apprehending a 21-year-old suspected loanshark runner at a Sembawang HDB carpark.

The incident, which occurred at about 3pm on Friday (Sept 24) at Canberra Road between blocks 311 and 300, drew the attention of curious onlookers, reported Lianhe Wanbao.

An eyewitness interviewed by the Chinese evening daily said that he was driving home that afternoon when he noticed two cars stopping at the intersection of the carpark. Curious, he stepped out of the car to take a closer look as well.

That was when the man saw a motorcyclist being "pinned down to ground by five or six other men" in the rain.

"A motorcycle was parked nearby and a grey helmet laid on the grass patch," said the man, who believed the suspect did not have time to remove his helmet completely before he was tackled to the ground.

Another female resident who did not want to be named said she was at home when she heard the commotion from below her block.

Looking out of her window, she saw the same scene described by the first eyewitness.

"The men kept shouting 'don't move!'," said the woman, and although the one who was subdued did not appear to resist, he continued yelling loudly.

The woman added: "The entire process lasted for about 15 minutes, and only when I saw a pair of handcuffs being taken out that I realised that the men were plainclothes policemen handling a case."

According to Lianhe Wanbao, police also apprehended the suspect's 20-year-old compatriot in the vicinity of Telok Blangah the same day.

Two men were arrested for their suspected involvement in cases of loanshark harassment, the police said in a statement on Sept 25. 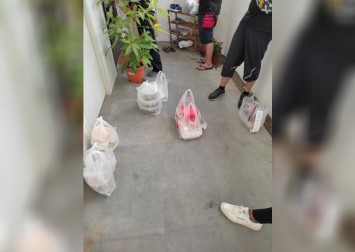 According to the statement, police had received two reports of loanshark harassment along Hougang Ave 5 and Chai Chee Road on Sept 20, where doors of residential units were set on fire.

With the help of closed-circuit television footage and police cameras, the two suspects were arrested on Sept 24. Drug paraphernalia was also found and seized from both men.

Lianhe Wanbao reported that the two men, Muhammad Ali Razali, 21, and Muhammad Farhan Abdullah, 20, were charged on Sept 25 for loanshark harassment. According to the charges against them, they had gone to debtors' homes in the wee hours of the morning to splash paint at their doors before starting fires.

They also used markers to vandalise walls at the lift landing area, scrawling the debtors' identification numbers and unit numbers. The men had also indicated the mobile number debtors should contact for loan repayment.

Under the Moneylenders Act, first-time offenders found guilty of loanshark harassment may face a fine of between $5,000 and $50,000, with a mandatory jail term of up to five years, and up to six strokes of the cane.