Driver jailed 6½ years after speeding with eyes closed, crashing into maid and leaving her to die

SINGAPORE - He was speeding with his eyes closed when he crashed his car into a maid who was walking along a sheltered footpath.

But instead of helping her, Sy Yong Da, 26, drove away and sent his car to a workshop to try to have it repaired to cover up what he had done.

The maid, Ms Domielyn Santos Ocampo, 40, was later found dead at the scene.

She leaves behind two sons, aged eight and 19, and her husband, in the Philippines.

On Friday (June 11), Sy was jailed for 6½ years, and will be disqualified from holding all classes of driving licences for a period of 10 years upon his release from prison.

He pleaded guilty to one count each of dangerous driving, failing to render assistance and obstruction of justice.

Another two charges for failing to stop after the accident and removing his vehicle from the scene were taken into consideration for sentencing. 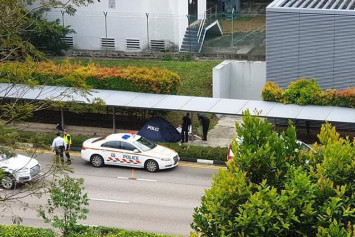 He was intoxicated at the time and was sleepy, closing his eyes as he veered across two lanes and crashed into the sheltered footpath.

He ran his car into Ms Ocampo, who was on her way back home from the market, causing her to be flung onto a pillar.

Sy immediately steered back onto the road and left her for dead, Deputy Public Prosecutor Samyata Ravindran told the court.

Sy drove away from the scene, went home to his condo unit at Spanish Village and called a towing company that he found online.

He later went down to the workshop in Kaki Bukit, waiting outside from 9.15am, and handed over the car keys when it finally opened at 10am.

Sy then went home to sleep.

It took five investigation officers to track Sy down, after they found debris from the car, including a broken number plate holder at the scene.

When questioned, he told them where the car was and took them to the workshop.

The car was seized before repairs were done. The owner of the workshop did not proceed with the repairs because Sy had not provided a police report detailing the accident.

A splatter of Ms Ocampo's blood and shreds of her clothing were found on the car, which was severely damaged with a cracked front windscreen and a broken bonnet, bumper and headlamp.

The court heard that Sy had been drinking beer mixed with cognac for several hours before the crash and slept very little. But he decided to take his female friend, identified as one "Alicia", out for a meal at a McDonald's outlet in Ang Mo Kio and drove her home at about 5.35am despite being sleepy and intoxicated.

The prosecution had urged the court to jail Sy for seven years and disqualify him from holding all classes of driving licences for at least 10 years after his release.

Sy was granted bail of $20,000 to settle his personal affairs and to have a meal with his family once Covid-19 restrictions allow dining in at eateries.

He is expected to surrender himself on June 22.

For killing Ms Ocampo, he could have been jailed for up to 10 years.

For obstructing the course of justice, he could have been jailed for up to seven years or fined, or both.