Lee Cheng Yan, who was given a lifetime driving ban among others, unlawfully went behind the wheel multiple times early last year.

SINGAPORE - The driver of a Maserati that had dragged a policeman for more than 100m in 2017 continued to drive while he was out on bail pending his appeal last year. He did so even though he had been banned for life from driving.

Singaporean Lee Cheng Yan, who had been sentenced to four years and seven months' jail, given a lifetime driving ban and fined $3,700 in 2020, unlawfully went behind the wheel multiple times early last year.

He was driving a car on March 12 last year when he was stopped and made to take a breathalyser test. He failed it and sped off. Two policemen chased him on their motorcycles.

Lee later abandoned the vehicle, but officers caught him three days later after an extensive manhunt.

The recalcitrant offender, who is currently serving his earlier jail term, pleaded guilty on Thursday (Jan 27) to 15 charges for offences including dangerous driving and graft.

He was sentenced to one year, nine months and 16 weeks' jail. He was also ordered to pay a $1,000 penalty over his graft charges.

Lee, now 38, will start serving his latest sentence after completing his earlier one.

On Nov 17, 2017, Staff Sergeant Khairulanwar Abd Kahar, then 26, stopped Lee, who was in a white Maserati, for driving without a seat belt. The police officer then approached the car to speak to Lee.

But Lee, who was under a driving ban at the time, fled the scene in his car.

Staff Sgt Khairulanwar was dragged along Bedok Reservoir Road when his uniform got caught in the driver-side door of the car. When he fell onto the road, Lee sped off without rendering help.

In December 2019, District Judge Ng Peng Hong convicted Lee of multiple charges, including failing to stop after the accident and obstruction of justice.

Lee was sentenced in July 2020 to four years and seven months' jail with a lifetime driving ban and a fine of $3,700.

Lee, who decided to appeal against this conviction and sentence, was released on bail that year. One of his friends later rented a BMW car, which Lee drove despite the driving ban.

At around 4am on March 12 last year, Lee was unlawfully driving the car along Macpherson Road when Staff Sergeant Muhammad Masri Mohd Yusof stopped him at a roadblock. Lee was given a breathalyser test, which he failed.

Deputy Public Prosecutors Timotheus Koh, Magdalene Huang and Senthilkumaran Sabapathy stated in court documents: "Staff Sgt Masri hence signalled for the barricade of the roadblock to be closed and requested for the accused's personal details.

"The accused failed to comply with Staff Sgt Masri's instructions. Instead, he suddenly drove off and manoeuvred the car through the barricade and sped off from the roadblock."

Two other police officers on motorcycles chased after Lee, who drove at around 140kmh and beat red light signals in his bid to get away. 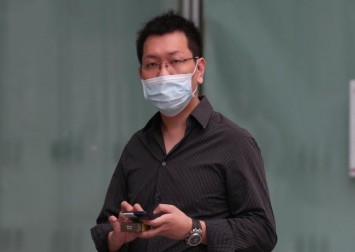 On Thursday, the DPPs told District Judge Kamala Ponnampalam: "The pursuit lasted for about 2.4km before the pursuing officers lost sight of the car after it made an abrupt left turn into Tai Seng Avenue. The accused then abandoned the car at the Tai Seng Industrial Estate carpark and fled from the scene, as captured by CCTV footage."

The High Court dismissed his appeal against his earlier conviction and sentence two months later.

The court heard that a man identified as Philbert Lim Zong Xian, 34, whom Lee knew, had needed the addresses of various people as he wanted to recover monies they purportedly owed.

The prosecutors said: "Some time in 2017, the accused told Lim that he had contacts who could find out the addresses of phone line subscribers using their phone numbers, and said that he could help Lim retrieve such information for a fee of $350 per number."

Foo used his access rights to the company's system to retrieve the subscriber's address. He handed the information to Lee, who then passed it on to Lim.

Lim's case is pending, while Foo, then 32, was sentenced to 18 weeks' jail in January last year.