An autopsy showed that the driver had busted alcohol limit.

SINGAPORE - The coroner's inquiry into the deaths of five men killed on Feb 13 last year in a fiery car crash in Tanjong Pagar heard that the driver had hit speeds of up to 148kmh before the accident.

He added that an autopsy showed that the driver - Mr Jonathan Long Junwei, 29 - had a reading of 86mg of alcohol per 100ml of blood.

This exceeded the legal limit of 80mg per 100ml.

Mr Long was driving a white BMW M4 at around 5.40am when it crashed into a shophouse before bursting into flames.

His fiancee, former air stewardess Raybe Oh Siew Huey, 26, rushed to the scene to try to help the occupants and was badly burned in the incident.

She spent four months in Singapore General Hospital (SGH) and will need multiple reconstructive surgical operations to help her recover from her injuries. 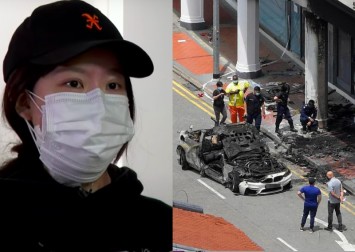 Four of the occupants of the car were working as financial advisers at Aviva Financial Advisers. Mr Wong was a former representative there.

The Straits Times earlier reported that Ms Oh and the occupants of the car had dined at a nearby Korean eatery before the accident.

Security camera footage showed the vehicle travelling down Tanjong Pagar Road before it crashed into the shophouse. It burst into flames seconds later.

Ms Oh was seen in mobile phone footage running into the flames to try and save the men.

The Land Transport Authority looked into the road conditions in Tanjong Pagar following the tragedy and subsequently installed more traffic-calming measures such as road dividers as well as pedestrian crossings.