Sergeant Al Asyraf Azman drew on his past experience with children and water sports to save the child.

Before becoming a police officer, Sergeant Al Asyraf Azman majored in outdoor and adventure learning at Republic Polytechnic and interned as a kayaking coach in his third year of school.

Familiar with children and water sports, the calm and quick-thinking 22-year-old saved a three-year-old girl from drowning in a hotel's outdoor swimming pool last month.

The incident took place on Feb 27, when the girl's family members were at the pool.

He was off duty and at the same venue with friends, after which he noticed "something pink underwater that was not moving for seven to 10 seconds".

Sgt Al Asyraf, who joined the Singapore Police Force more than a year ago and is stationed at Nanyang Neighbourhood Police Centre, told The New Paper: "I thought it was weird, so I went into the water and walked closer. Then I saw arms and legs. From there, I dived in and pulled her out."

After he lifted the girl out of water, her father, who had rushed to the scene, set her down on a nearby bench.

Noticing that she was not breathing and had no pulse, Sgt Al Asyraf performed cardiopulmonary resuscitation (CPR) on her, a skill that he obtained at Republic Poly and reinforced upon joining the police force. 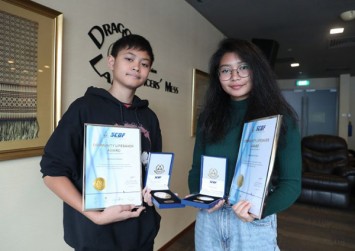 He was relieved when she started throwing up water and regained signs of life.

Sgt Al Asyraf and the girl's father continued to perform CPR on her to "pump water out of her system" until the ambulance arrived six minutes later.

He said: "The girl's mother approached me before the ambulance left and thanked me, telling me, 'I wouldn't know what would have happened if you weren't there.'"

Sgt Al Asyraf is thankful to receive the Community Lifesaver Award and the recognition for his actions, adding that he hopes this can inspire more people to do the same.

"I am not receiving this award because I am a police officer - anyone can receive this award. I hope it can help people realise that anyone can save lives."

This article was first published in The New Paper. Permission required for reproductions.