E-scooters to be banned from Singapore footpaths from Nov 5

E-scooters have been the main subject of scrutiny amid safety concerns around their usage.

SINGAPORE - Electric scooters will be banned from footpaths from Tuesday (Nov 5), in the latest and toughest measure yet to address safety concerns.

From now until the end of the year, the authorities will mainly issue warnings to errant riders, but a zero-tolerance approach will be taken from next year. Those caught flouting the rules can be fined up to $2,000 and/or jailed up to three months if convicted.

The ban means that e-scooters will be confined to only 440km of cycling paths islandwide, instead of the 5,500km of footpaths riders could use before.

Announcing the tougher stance, Senior Minister of State for Transport Lam Pin Min said in Parliament on Monday: "Over the last two years, we put in great efforts to promote the safe use of motorised personal mobility devices.

"Despite significant efforts, we continue to encounter errant riders who use non-compliant devices and ride dangerously."

Dr Lam made the announcement in a statement responding to questions from five MPs, including Mr Sitoh Yih Pin (Potong Pasir), who asked about the Transport Ministry's plans to improve safety levels around the use of personal mobility devices (PMDs).

Devices classified as PMDs include e-scooters, hoverboards and unicycles. But e-scooters have been the main subject of scrutiny amid safety concerns around their usage.

There are 100,000 registered e-scooters in Singapore. 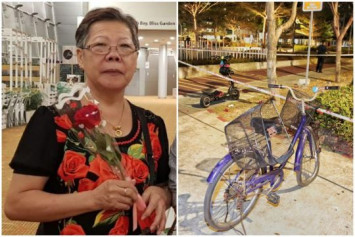 Dr Lam said the number of accidents involving motorised e-scooters continues to rise, with a fatal one involving a cyclist and an e-scooter rider taking place in Bedok in September.

There have also been a few riders who lost their lives in accidents, he added.

The authorities catch about 370 offenders per month.

Dr Lam noted that the move was not a complete ban on e-scooters.

He said bicycles and personal mobility aids will continued to be allowed on footpaths, cycling paths and park connectors, with a 440km-long network of cycling path now available.

Cycling path projects are nearing completion in major towns such as Ang Mo Kio, Bishan and Tampines, and the total length of the network is expected to be tripled by 2030.

Dr Lam also said in Parliament on Monday that no licences will be granted to e-scooter sharing businesses who applied earlier this year to start their businesses here.

An incentive scheme to encourage e-scooter users to dispose of devices that do not meet a safety standard will also be extended by a month till Dec 31 this year.