SINGAPORE - An electric scooter that was left charging in the living room of a Hougang flat burst into flames on Friday evening (March 29), with four people in the unit fleeing for their lives.

The Singapore Civil Defence Force (SCDF) said it was alerted to the fire at Block 313 Hougang Avenue 5 at about 7pm.

SCDF said that the fire, which involved a personal mobility device (PMD) in the living room of the seventh floor unit, was put out using a water jet.

A 27-year-old man who lives in the flat told Chinese-language newspaper Shin Min Daily News on Saturday that he was resting in the living room when he saw sparks from the e-scooter, before it burst into flames. 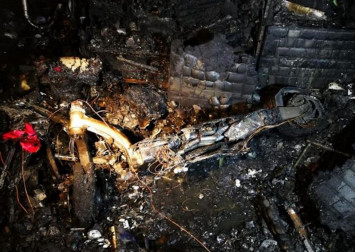 The man, who has to rely on a wheelchair or a cane due to spinal problems, said: "It happened so suddenly and I didn't have a chance to take anything with me from the flat. I crawled out of the gate to save my life."

He added that about 10 neighbours came to help him.

His mother, stepfather and uncle were also in the flat at the time and fled after he did.

His stepfather, a 48-year-old pest control worker, was treated for minor burn injuries on his leg, while his uncle has been hospitalised, he added.

He said that his uncle got hurt as he was trying to put out the fire by collecting water from the toilet.

SCDF said that two men who were in the flat were taken to the Singapore General Hospital for minor burn injuries and bruises.

About 15 people had evacuated from the block.

According to Chinese-language newspaper Lianhe Wanbao, three pigeons were in cages inside the burnt flat.

Wanbao reported that the homeowners, who were animal lovers, broke down in tears after they found out that the birds had died.