Employers must notify MOM of workers returning from China

Manpower Minister Josephine Teo and National Development Minister Lawrence Wong during a visit to the Tuas View Dormitory on Feb 6, 2020.

SINGAPORE - All employers will have to notify the Ministry of Manpower (MOM) of employees who are due to return from China, said National Development Minister Lawrence Wong on Thursday (Feb 6).

This is to allow their return to be staggered and the flow of workers managed better, said Mr Wong, who co-chairs the government's coronavirus taskforce.

There will also be tighter surveillance and enforcement of the 14-day leave of absence (LOA), which is mandatory for all such workers, whether they are Singapore residents and foreign work pass holders.

Employers will also receive $100 a day for each worker serving the LOA, and this is applicable to Singaporeans, permanent residents and work pass holders. This is equivalent to what they are receiving for those on quarantine orders. The foreign worker levy for those on LOA will also be waived for the LOA period. Details on when these measures will kick in are still being worked out.

Acknowledging concerns raised by employers about workers who have been evicted by their landlords , Mr Wong added that the government will work with dormitory operators to provide facilities if employers cannot find accommodation for workers to serve their LOA.

He was speaking on the sidelines of a visit to the Tuas View Dormitory on Thursday (Feb 6) with Manpower Minister, Mrs Josephine Teo. Both ministers spoke to the operators and visited the dormitory's prepared isolation room and an LOA facility with 32 beds.

The dormitory is also providing such workers with basic necessities like water and food during the LOA period.

When asked about the number of returning workers or employers who were unable to find alternative accommodation, Mr Wong did not give a figure but said it was "quite a few".

"I'm glad that Singapore landlords have been cooperative and responsible, and by and large have been prepared," he said.

Details on how stricter enforcement of LOAs are still being worked out among the government agencies, Mr Wong added. 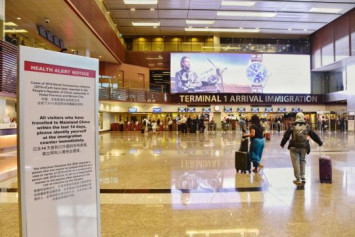 "We already have very strict surveillance measures when it comes to quarantine, whether it is through phone calls, spot checks, video calls and we can make use of similar technologies and measures for monitoring and surveillance," he said.

Penalties can be imposed on companies or on workers who do not observe the mandated leave of absence period, such as by revoking work permit privileges.

The government had previously announced they would take errant landlords who evict tenants on LOA, home quarantine or based on nationality to task.

These included barring their addresses for use in future work pass applications, and from renting to foreign work pass holders in future.

Travel restrictions on those with a recent travel history to China, including a 14-day LOA for returning Singapore residents and long-term pass holders kicked in late last Saturday.

Last Sunday, Mrs Teo said that 30,000 work pass holders who are China nationals left Singapore over the Chinese New Year break and have not returned. But not all of them live in housing estates.

When asked for an update on these work pass holders on Thursday, Mrs Teo said the majority were still out of Singapore.

"That's why it's important for us to get in touch with the employers. Depending on their own business needs, they may not all want to bring back their workers."

According to MOM's website, foreign workers may live in dormitories, Housing Board flats or private properties. Those in construction may also live in temporary quarters.

But they are subject to certain restrictions, depending on their nationality, work pass type and the sector that they are working in. For instance, non-Malaysian work permit holders from the manufacturing sector are allowed to rent bedrooms in HDB flats, but not the whole flat.

Employers who spoke to The Straits Times had earlier said that they were footing the bill for alternative accommodations for their workers who had been kicked out by their landlords.

They called on the government to provide more support, including alternative accommodations for workers to serve the LOA.