End year with a bang with fireworks musical

Entitled 2019: A Space Odyssey, the 90-minute long spectacle boasts six chapters that will take audiences on a journey they have never experienced before.

Expect a space odyssey that is unlike the ones you know from Stanley Kubrick and Arthur C. Clarke this New Year's Eve.

Revellers at The Star Island Singapore Countdown Edition at The Float @ Marina Bay will be treated to a Japanese musical complete with pyrotechnics, lights, 3D surround sound, circus acts and ballet performances.

Entitled 2019: A Space Odyssey, the 90-minute long spectacle boasts six chapters that will take audiences on a journey they have never experienced before, show producer Shigeyoshi Sakamoto told The New Paper.

Each chapter - Ceremony, Another Earth, Galaxy Party, Gravity, Microcosmos and the Grand Finale - will be choreographed to a unique soundtrack, complete with 3D surround sound.

The 44-year-old said: "In the first half, audiences experience what it feels like to be in a supernova and witness the creation of humanity and evolution.

"The show then takes audiences into the star, with stunning sand-red and deep crimson visuals. The journey ends with a focus on how we are all tied to the greater universe as one."

Unlike other fireworks, he explained, the fireworks at Star Island are handcrafted by hanabi artisans, with traditional techniques that make it appear more colourful and intricate.

Hanabi, which means fireworks in Japanese, also refers to a long-standing summer tradition in Japan where people gather to celebrate and watch firework displays.

"Watching fireworks is a universal way to mark the start of a new year and new beginnings. It will definitely be a one-of-a-kind experience to Singaporeans young and old," said Mr Sakamoto.

He said: "There isn't a special exam to become a fireworks artisan, but the mindset to always create something new is extremely important. Becoming a top-level craftsmen is not an easy road." 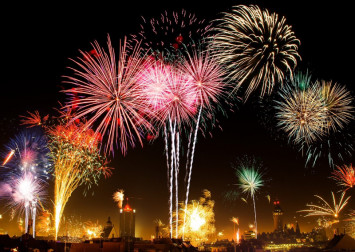 Marutamaya Ogatsu, founded in 1864, excels in Hanabillusion, an act that synchronises fireworks and music.

Mr Ogatsu said: "Audiences can experience the symphony of fireworks with 3D surround sound, lighting, stage performances and cutting-edge technology. It will be a night they won't forget."

Apart from fireworks, revellers will also be wowed by Singapore's largest drone show performance, with 500 drones taking to the skies.

The Star Island fireworks musical is one of the many performances at the 15th edition of Singapore's biggest countdown event - the Marina Bay Singapore Countdown 2020.

The fireworks show will also feature a family-friendly entertainment zone and a food village.

Doors open at 5pm and re-entry is allowed until 8.30pm. The main show starts at 10.30pm. Tickets, available at star-island.sg, are priced from $88.