Actor Nick Mikhail had posted videos on Instagram about URA officers and police officers entering his home on July 31, 2021.

SINGAPORE - Safe distancing enforcement officers can enter, inspect and search various premises, including residences, without a warrant, to check whether Covid-19 regulations are being complied with, said the Urban Redevelopment Authority (URA) on Monday (Aug 2).

"Nonetheless, officers will calibrate their approach for each premises, based on the circumstances of each case," it said.

URA provided this response after actor Nick Mikhail posted videos on Instagram about URA officers and police officers entering his home on July 31.

Mr Mikhail first posted a video lasting 7½ minutes which has since garnered 113,000 views. In the video, he questioned why officers could enter his home at night without a warrant or a court order.

He was not home at the time, so officers spoke to his wife who he said was resting then.

He followed this with another video captured by a closed-circuit television camera showing six officers at his home. On Monday night, he posted another video lasting 15 minutes on the incident.

URA said it has noted the social media postings and has contacted him to address his concerns.

"Since late June this year, agencies had received repeated complaints from residents of the landed housing estate that some residences, including Mr Nick Mikhail's, were having gatherings with more than the permitted number of visitors. There were also complaints about the noise generated from the alleged gatherings," it said.

"In response to the feedback, officers from different agencies had been deployed to the estate to check for potential infringements of Covid-19 regulations as well as noise."

When they arrived at his home, the officers saw the gate was wide open and the house lights turned on.

"They also spotted two cars parked outside the residence, and thus proceeded to ascertain whether there were any visitors in the unit, and if the numbers were within permissible limits," URA said.

The officers entered the car porch and knocked on the door of the house, it added. They identified themselves and explained the purpose of their visit after a woman opened the door.

"She agreed to allow the officers entry, and escorted them around the house to facilitate their checks," URA said, adding that all three safe distancing enforcement officers, one of whom is female, followed her in a single file for the inspection, and were mostly in one another's line of sight. 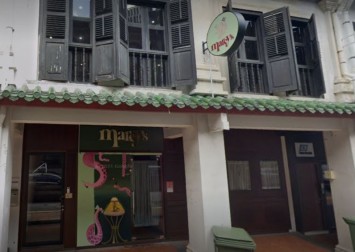 URA added that the inspection lasted less than 10 minutes and the officers left after ascertaining that there were no other people in the house.

They then went to check on other homes in the area.

"The safe distancing enforcement officers and police officers were polite towards the female occupant and treated her with respect throughout the inspection," URA said.

There is also a limit of two distinct visitors per household per day.