A woman who allegedly cheated around 70 friends and acquaintances of more than $800,000 is under police investigation.

Ms Alexandra Low, a former financial analyst, is believed to have borrowed money under various pretexts, such as having to make a down payment for a house, according to a copy of a police report obtained by The Straits Times.

The police confirmed that investigations are ongoing.

The Straits Times understands that more than 10 separate police reports have been filed by Ms Low's alleged victims.

The report seen by the ST stated that 73 friends had loaned Ms Low money after she approached them with various reasons.

Some were told that she needed the money to pay off debts incurred by her uncle due to a work accident, while others were told that her mother was in a hospital and she desperately needed to pay bills.

Her friends who spoke to ST said they found out about the alleged ruse after they started talking among themselves and realised that she had been borrowing money from many of them. Some confronted her about the loans while some friends accompanied her to a police station to "confess" last month.

A former schoolmate and close friend told ST that Ms Low had borrowed more than $20,000 from her in August.

Ms Low had claimed that she desperately needed the money to pay for her house's down payment but could not come up with the cash as her father had loaned money to another friend.

She also told the friend — who declined to be named — that she could pay back the sum within the week, but subsequently dragged out the payment in stages, coming up with different excuses each time. She also allegedly asked for more loans after repaying the original amount.

"We thought it was her father (who) went into a lot of debt. That's why even though she wasn't telling us the truth, we still lent her money, because she sounded really desperate," said the 25-year-old friend, who is still owed more than $5,000.

Another friend, a 27-year-old former schoolmate at Nanyang Technological University (NTU), said he had trusted Ms Low enough to loan her $1,000. 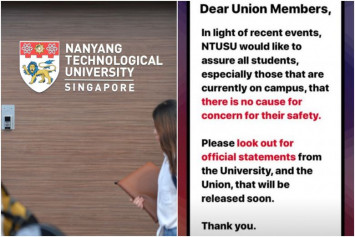 "This wasn't someone who's a serial gambler who doesn't have a job… She was a very esteemed member of NTU and she was a valedictorian of the school," said the friend, who wanted to be known only as Mr Tan.

He added that it did not make sense to sue her for the money as the amount they could claw back would not be worth the legal fees.

Ms Low admitted to using the money for "beauty treatments", but said she has, through her father, paid back around $400,000 to various creditors.

She said she has been let go from her job after someone told her bosses about the police investigation.

"In terms of repayment I do intend to repay, but I do have to find the means for another source of income," she added, noting that she was undergoing "psychological treatment and counselling" for her behaviour.