SINGAPORE - Former National University of Singapore lecturer Chan Cheng, who was on the run for 17 years after molesting five teenage boys at a school camp, was sentenced to three years and seven months' jail on Monday (July 29).

Chan, who is now 59, had been found guilty of five counts of molestation last week by District Judge Shaiffudin Saruwan after a trial.

Seven other molestation charges involving four boys were taken into consideration for sentencing.

On Monday, the prosecution called for the court to sentence Chan to 50 months' jail, which included an additional five months in lieu of caning, as he is above the age limit to be caned.

"The only reason why the accused has escaped caning is that he absconded. He should not be given the benefit of this," Deputy Public Prosecutor James Chew argued.

In his mitigating plea, defence lawyer Ramesh Tiwary urged the judge to be "as lenient as possible" as Chan had a "sterling" record up till 1999.

Mr Tiwary added that Chan had also continued to contribute and help young teenagers, even when he was in Malaysia.

In his sentencing remarks, Judge Shaiffudin said that it was "particularly egregious" that Chan had abused the trust and authority vested in him by the school and the boys' parents.

He added that there was also premeditation on Chan's part in carrying out the 12 offences involving nine boys who were 13 years old at the time, and that he had taken advantage of and exploited their vulnerability.

In June 1999, Chan molested the Secondary 1 students during a three-day school camp at the Guillemard Camp in Old Airport Road. In Nov 29 that year, he failed to turn up in court and a warrant of arrest was issued against him. 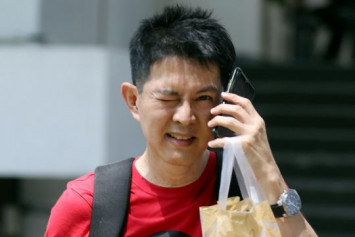 His employment contract was later terminated by NUS after he failed to turn up for work.

During the trial that began last year, some of the victims testified in court that Chan had touched their genitals one night during the 1999 trip.

A Secondary 2 student leader also said that he witnessed Chan touching one of the students' private parts, and alerted a teacher the next day. A police report was lodged and Chan was arrested on Nov 27, 1999.

However, he later absconded and fled illegally to Malaysia while he was released on bail.

It is not known how he was caught in Malaysia but he was finally sent back to Singapore on Dec 7, 2016.

On Monday, Judge Shaiffudin said he would have sentenced Chan to a total of 38 months' jail and 10 to 11 strokes of the cane.

However, as Chan is older than 50, he cannot be caned. Instead, the judge imposed an additional five months' jail in lieu of caning, bringing the jail term to a total of 43 months.

Chan's lawyer Ramesh Tiwary indicated that his client plans to appeal against the conviction, and requested for bail to extended.

Deputy Public Prosecutor James Chew, who had previously asked Judge Shaiffudin to revoke Chan's bail, did not oppose but requested the court increase the bail amount by $30,000 to $90,000.

DPP Chew also urged the court to require Chan to wear an electronic tag so that his whereabouts can be monitored, as well as to report to the investigation officer every week.

These were accepted by the judge, and Chan is currently out on bail.