A Woodlands HDB flat resident came face to face with a raging fire after hearing a series of explosions coming from one of their bedrooms.

The fire, which occurred at Block 842 Woodlands Street 82 on Monday (Sep 23), saw two people declining to be taken to a hospital.

Lianhe Wanbao reported that the fire involved an air-conditioner unit in the bedroom.

Stomp contributor G contributed a video showing firefighters arriving at the scene and putting out the fire.

After seeing the fire, the flat owner immediately shut the door and rushed everyone out of the house.

24-year-old Yamilan, who is the granddaughter of the flat owner, said: "The door was shut because we left the air-conditioner on.

"No one was in the room then. We were all in the living room when we heard an unusual sound coming from that room."

By the time the family noticed the fire, it was already too late. 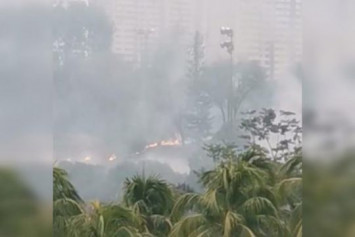 The family members who were at home during the incident included a five-year-old, a 73-year-old woman in a wheelchair and an 82-year-old man.

After evacuating to a safe area, the family could only look on as the fire consumed their home.

Yamilan said that they have been using the air-conditioner for six years and it was from a well-known brand.

Reporters at the scene said that the air-conditioner was reduced to ashes and only its pipings were left on the wall.

Yamilan said it's a blessing that everyone in the family is unharmed despite the house being inhabitable due to the fire.