When he received his O-level results slip in 2002, Fauzi Baharin was devastated to see a score of 32 points. It crushed his dream of getting into a junior college and made him think it was the end for him.

Little did he know that he'd make an academic comeback.

Fauzi, now 35, graduated with honours from the National University of Singapore (NUS) this month, holding a bachelor of technology degree in mechanical engineering.

Speaking with AsiaOne, he said that he did well in school when he was young, scoring good PSLE grades that landed him in Yusof Ishak Secondary School.

He scored 16 points for his O-level prelims but things soon took a bad turn.

"I was complacent and overconfident," Fauzi said, which led him to fail in the national exams.

Disheartened by his grades, he gave up and chose to study in ITE (Institute of Technical Education) despite hearing much negativity from the public, he said.

When he first entered ITE Dover to undergo a Higher Nitec course in mechanical engineering, little seemed to have changed. Fauzi was still not willing to study and did not pay attention in class.

"As months passed, I found the motivation to study again. This is when I saw some of my classmates struggling to understand engineering maths and that actually affected me," he said.

At that point in his Higher Nitec course, Fauzi, who had taken additional maths in secondary school, began to open up to his classmates and started helping them understand the subject.

"I felt satisfied with my effort in helping them to pass or achieve good grades," he added. 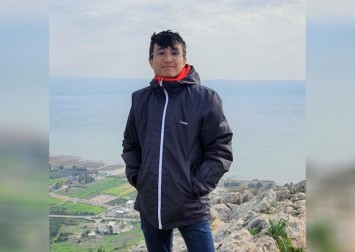 Fauzi then worked at DuPont, an international manufacturing and technology solutions company, for a few years before deciding to further his studies and pursue a part-time diploma in mechanical engineering at Ngee Ann Polytechnic in 2013.

He continued to help his poly classmates with mathematics, saying: "I think that by helping others, I'm actually learning better.

"By explaining to them repeatedly, you tend to remember the steps on how to solve a problem. This motivated me to study harder as I knew that I will help others in return".

Besides helping others, Fauzi also asked lecturers about things he couldn't understand or needed further explanation, sometimes even going the extra mile to look up information on Google or watch YouTube videos to understand his modules better.

His motivation, coupled with his diligence, led him to achieve a GPA of 3.71 for his diploma. This helped him get into NUS in 2017.

For the next four years, Fauzi juggled a full-time job as a mechanical engineer, being a father, and studying part-time.

While he admitted that it was exhausting hitting the books after a full day's work, support from his family, friends and others helped him pull through the tough times.

Fauzi said he finally realised his dream of going to NUS, adding: "My hard work paid off and I graduated with honours!"

Over the years, he also climbed the ranks at his workplace and is now a senior mechanical engineer at DuPont.

When asked what advice he had for those who did not do well in a major exam, Fauzi shared:

"Don't dwell on failures. Learn from your failures and move on in life with double the enthusiasm to achieve your aim or goal."