Fake news must be curbed before it affects society: PM Lee

There is wide scope for discourse in Singapore, but fake news is a distinct and specific problem that must be curbed before it affects society, said Prime Minister Lee Hsien Loong.

He made this point in an interview, when asked for his response to concerns that proposed laws to tackle fake news would curb free speech. There is no society in which free speech is absolute or uncontrolled, he said, noting that it exists within appropriate boundaries.

For example, speech that is defamatory or threatening in nature lies outside of these boundaries, said PM Lee in an interview conducted in Mandarin with variety show host Kym Ng and news presenter Evelyn Lam that was broadcast on Mediacorp's Channel 8 last night.

"We must set an appropriate boundary that would allow us to protect free speech and allow people to exchange information, thoughts and opinions in a meaningful way," he added.

Other countries, like the United States and those in Europe, are also grappling with the problem of fake news, PM Lee said, citing Germany as an example of a country that has enacted laws to tackle the issue. 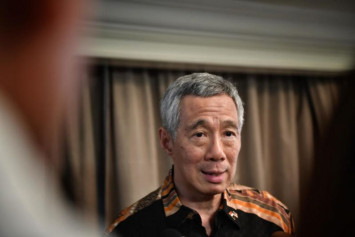 In the one-hour interview, PM Lee touched on various technology-related topics, including the management of his social media account, encouraging the older generation to be tech-savvy, and the new Protection from Online Falsehoods and Manipulation Bill.

The Government introduced the proposed legislation earlier this month, and it is set to be debated when the House sits next Monday.

The proposed laws may not be able to eliminate all fake news, but would be able to lessen the impact of such falsehoods, said PM Lee.

Fake news poses a real challenge to Singapore, he said, citing the 2016 US presidential election, which the US said Russia interfered in, a charge the Russians have denied.

PM Lee said it is fully possible for others to interfere and spread fake news in Singapore too.

"I don't know which other countries might want to participate in our politics, but we do know that we are a very open country," said PM Lee. "We must prepare and shore up our defences, and that's why we have introduced the (Protection from Online Falsehoods and Manipulation Bill)."

PM Lee was also asked about a recent survey which showed that most Singaporeans are confident they can distinguish between real and fake news. Last September, an online survey by market research agency Ipsos showed that 80 per cent of survey respondents were confident they could spot fake news, even though 90 per cent of them later mistakenly identified fake headlines as real.

People believe they can identify fake news when it presents itself, but it is impossible to tell at times, said PM Lee.

It is difficult to verify the source of news on social media, which may have scant information, he said, adding that some social media accounts do not even show the account holder's real identity.

"When you don't know who it is (behind the account), how can you tell if it's real or fake news?" said PM Lee.

It is hence important to verify the source and depend on trustworthy sources for news, he added.

Noting that there are all types of falsehoods online, the Prime Minister said there was a website that used his pictures and his name to market a bitcoin investment.

"They had 'quoted me' as saying that the product is very good and that I encouraged everyone to invest. It was absurd. But when others see it, how would they know if it's real or fake?" said PM Lee.

He also said that new problems will crop up with the emergence of new technology such as artificial intelligence. "The world is constantly changing and technology will always move forward with the times, so we must adapt and think of ways to get rid of the bad."