The family of Corporal Kok Yuen Chin, 22, has viewed the CCTV footage of the alleged ragging incident that led to his death in May.

Cpl Kok's parents, siblings, aunts and girlfriend were shown parts of the video footage at the Police Cantonment Complex on Tuesday morning, a day before five men who were allegedly involved in his death were charged in court.

The footage captured the series of events that unfolded on May 13 before the death of Cpl Kok, a full-time national serviceman (NSF) with the Singapore Civil Defence Force (SCDF).

They showed the initial celebration for Cpl Kok's impending operationally ready date, the moment he ended up in the pump well and the 40-minute rescue bid by station mates when he did not surface, said the older Mr Kok, a Singapore permanent resident from Malaysia.

When asked how he felt about the footage, Mr Kok said in Mandarin: "He is not here... I don't know what... I can say to change that."

However, the charging of the five SCDF regulars has left him conflicted. "They were really celebrating; they even had a cake. If they are punished, I won't get my son back. But if they are not punished, it is also bad for my son," said Mr Kok, who did not attend the court session yesterday as he had to work. 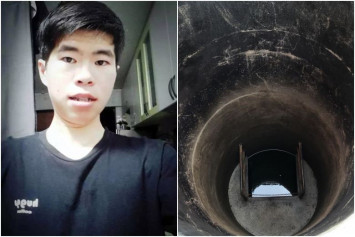 He said the family had received a sum of money from his son's NSF insurance, but declined to elaborate.

Cpl Kok's aunt, Ms Helen Kok, 55, a nurse, said the family had requested to view other segments of the video, but that was rejected. She said in Mandarin: "Perhaps they just showed us the most important parts. But I think viewing it all will really help us understand it."