Female BMW driver, 67, rams through railing and falls 10m onto road after stepping on wrong pedal 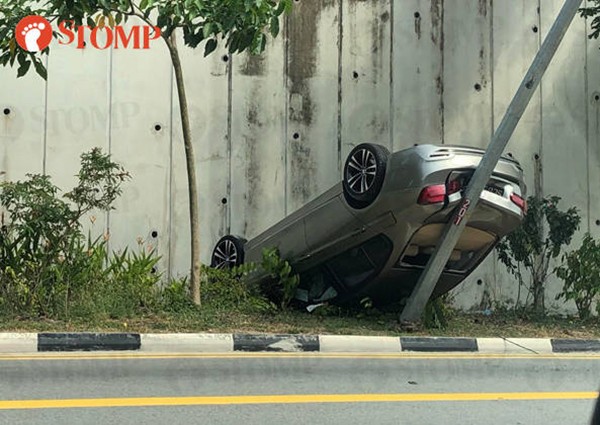 A 67-year-old woman was taken to hospital after her car crashed through a railing, fell 10 metres down onto a road and ended up overturned on Friday afternoon (Aug 9).

Responding to a Stomp query, the police said they were alerted to the car accident along 388 Clementi Road at 2.28pm.

The female driver was conscious when taken to National University Hospital.

Stomp readers Nas and Anonymous contributed photos of the overturned BMW leaning against a slanted lamppost at the scene.

According to Shin Min Daily News, the female driver had been buying flowers at a nursery in the vicinity.

She is believed to have accidentally stepped on the wrong pedal while trying to make a u-turn in the nursery.

The BMW then crashed through a metal railing and fell around 10 metres onto the road below, where it hit a lamppost and landed in an overturned position.

Stomp contributor Nas, who also submitted a video showing the silver BMW below the damaged railing, said: "There were traffic police at the scene.

"All lanes except one were cordoned off."

An employee told Shin Min that there was only one entrance at the nursery. Motorists who came to buy flowers would have to go up a slope and make a u-turn before they could exit.

He also said that the woman was a regular customer, which was why he recognised her BMW.