Fire at Tampines flat caused by PMD that was left charging; elderly woman taken to hospital

SINGAPORE - A personal mobility device (PMD) that was being charged in a Tampines Housing Board flat living room resulted in an electrical fire on Tuesday (Oct 9). An elderly woman was taken to hospital due to the incident.

The Singapore Civil Defence Force (SCDF) said that it responded to the fire at around 5.15pm. Firefighters extinguished the fire with a compressed air foam backpack, and later used a water jet to damp down the area.

During damping down, water is applied to wet burnt surfaces immediately after a fire is extinguished. This is done to prevent the fire from rekindling.

An elderly woman, who was in a neighbouring unit, was taken to Singapore General Hospital for smoke inhalation. No other injuries were reported. 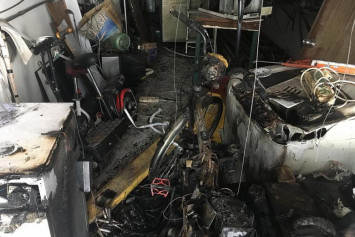 Preliminary investigations found that the fire had originated from the PMD's battery pack.

In a Facebook post on the incident, the SCDF advised the public to examine PMD batteries for damage or deformities, such as bloated, corroded, or powdery batteries.

Users should avoid overcharging PMD batteries, or leaving them to charge overnight. When charging the batteries of PMDs, users are advised to place them on hard flat surfaces so as to allow any heat generated to dissipate.

PMD batteries that are being charged should not be placed near combustible materials, or along an escape path.