SINGAPORE - World No. 22 Loh Kean Yew let out a huge roar as he became the first Singaporean shuttler to secure a Badminton World Federation World Championships medal after beating India's 32nd-ranked Prannoy H. S. 21-14, 21-12 in their quarter-final in Huelva, Spain on Friday (Dec 17).

He will meet Denmark's world No. 3 Anders Antonsen - who advanced after Malaysia's world No. 7 Lee Zii Jia retired in the decider of their last eight meeting - in the semi-final on Saturday, which also means Loh is assured of at least a shared bronze.

Against Prannoy, Loh got off to his trademark explosive start, taking a 3-0 lead after fending off two smashes and winning a 36-shot rally.

But the 29-year-old proved to be a tough customer and bounced back to 11-10, before Loh turned on the afterburners. 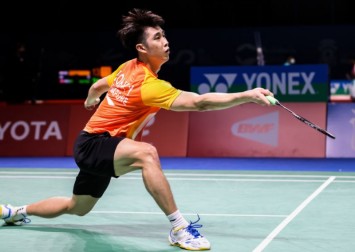 Similarly in the second game, they were locked at 8-8 before the 24-year-old stormed home with the historic win.

It has been a strong end to 2021 for Loh, who surged 21 places in eight weeks to crack the top 20 before settling in his current position.

Besides capturing the Dutch Open and Hylo Open titles in the past two months, he also claimed the scalps of Japan's then-world No. 1 Kento Momota (Indonesia Open), Malaysia's world No. 7 and All England champion Lee Zii Jia (French Open) and Chinese Taipei's world No. 4 Chou Tien-chen (Hylo Open).

Every remaining match in this event will be a history-making one, and while he has never played Antonsen before, it will not daunt him, as he has already recorded first wins over Axelsen, Wraber and Prannoy.