Shariff Samat earned his first and only cap with the Lions in 2013 in a friendly match against Myanmar. The defender had made over 100 appearances in the S-League, now known as the Singapore Premier League.

SINGAPORE - Shariff Samat was a footballer who wore his heart on his sleeve and gave everything on the pitch each time he played.

This was the common refrain among former teammates and friends who paid tribute to the ex-Singapore international, who died on Monday (Feb 10) at the age of 36.

The Straits Times understands that his sudden death was due to a heart attack. He left behind his wife and a four-year-old daughter.

He earned his only cap with the Lions in 2013 when he played the last 20 minutes in a friendly against Myanmar, and won a bronze medal with the Under-23 team at the 2007 SEA Games in Thailand.

The Football Association of Singapore (FAS) said on its SPL Twitter account that it is “deeply saddened to learn about the passing of former player Shariff Samat”.

“Our thoughts and condolences go out to Shariff’s family and loved ones during this difficult time.”

Home United midfielder Shahril Ishak, who was his teammate at the 2007 SEA Games, said: “He was really happy when we won the bronze medal, it meant so much to him and his dad.

“There was pressure on him because he’s the son of a football legend and people kept talking about whether he would take his father’s place, but I knew no matter what, he would give 100 per cent in the game.”

Defender Baihakki Khaizan, who was Shariff’s Young Lions teammate in 2006, commended him for being a great friend off the pitch and someone who was “full of sincerity and a very passionate person”.

“Everyone’s still in disbelief, but I appreciate the times that we had together,” said the 36-year-old, who plays for Thai club PT Prachuap.

A passionate player on the pitch, Shariff was also known for his temper, as he ran into trouble on several occasions.

In 2016, he was jailed for two weeks for voluntarily causing hurt to his brother-in-law. 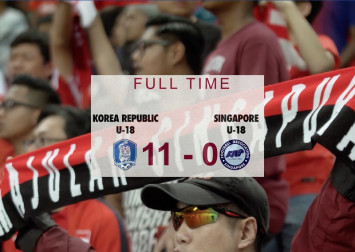 While playing for Sembawang Rangers in 2003, he was banned for nine months and fined $500 by the FAS for punching and breaking the nose of Geylang defender Peter Bennett in an off-the-ball incident.

In 2011, Shariff, playing in Hougang colours, was suspended for five games and fined $1,500 for a brawl with Etoile FC goalkeeper Hadama Bathily, which resulted in the match being called off before kick-off.

Despite his transgressions, his passion for the game commanded the respect of those around him.

National goalkeeper Hassan Sunny, who played at Tampines with Shariff in 2008 and 2009, recalled how Shariff treated every game “like it was a final”.

The duo met in 2002 when they were students at the Institute of Technical Education (ITE) Ang Mo Kio.

Hassan added: “We grew up together and he was like a brother to me. He was a very loving person and a good friend.”