Founders' Memorial design picked, building to be part of Marina Bay skyline by 2027

SINGAPORE - Come 2027, the Marina Bay skyline will be reshaped with the addition of a new building - one with clean lines and a flowing green terrain that leads to an amphitheatre.

It is the upcoming Founders' Memorial, which honours Singapore's pioneer leaders, located in a 5ha site in Bay East Garden.

The linear design, which integrates lush greenery and foliage, was unanimously selected as the winner by a seven-member jury.

The panel commended the submission for its distinctive architectural, landscaping and place-making characteristics, among other criteria. It won against four other shortlisted designs.

It will have a viewing gallery, a lake, a forest trail and an amphitheatre suitable for large gatherings.

Mr Lee Tzu Yang, chairman of the Founders' Memorial Committee and head of the jury, said: "The winning design is sensitive and functional, and embodies the spirit and values of Singapore's founding team of leaders. It's a unique design, incorporating landscape and architecture, that brings visitors on a journey of discovery."

He said the jury found that the design also allowed for good accessibility and integration with Bay East Garden, connectivity to public transport and had a thoughtful layout of spaces, which can be adapted to future programming and activities.

Construction work for the memorial will begin in 2022. It will be served by the upcoming Founders' Memorial MRT station on the Thomson-East Coast Line.

Mr Kengo Kuma, design lead of the winning team, said his team took inspiration from the idea of a path that traces the legacy of Singapore's founding leaders.

"It simultaneously honours the past, and inspires the present and future. The design aims to be a 'living memorial', to be owned by each new generation of Singaporeans," he said.

Read Also
First Look: We get a sneak preview of Jewel Changi Airport 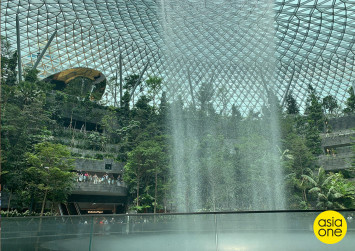 Notable buildings by Kengo Kuma & Associates include the Yusuhara Wooden Bridge Museum in Kochi, Japan, V&A Museum Dundee in Scotland and the National Stadium in Tokyo.

To seek the best design for the new landmark, an international architectural design competition was launched in January last year. It drew submissions from 193 architects here and overseas and five were shortlisted.

The five shortlisted designs were showcased in a roving exhibition late last year, when more than 50,000 members of the public picked their favourite design. The responses were taken into consideration by the jury when picking the winner.