Gardens by the Bay murder: Accused asked victim to be his girlfriend at first meeting

SINGAPORE - Accused murderer Leslie Khoo Kwee Hock, 50, made a "heroic" impression on his victim when they first met in 2015, the High Court heard on Tuesday (March 12) on the first day of his trial.

He asked senior engineer Cui Yajie to be his girlfriend at their first encounter and she agreed within a month.

An account of how the couple's relationship started, and later soured, was related in court when one of the victim's colleagues took the stand.

Khoo is accused of strangling Ms Cui in his car on July 12, 2016, after she threatened to expose his lies.

Ms Wu Wenjuan, who was close to Ms Cui as they were both from China and of the same age, told the court that the victim would share details of her relationship over lunch.

Ms Cui met Khoo in 2015, on the day she went to her former boyfriend's condominium, hoping to patch things up with him.

When her ex refused to open the door, she began crying loudly outside, causing a security guard to appear on the scene.

At this point, Khoo walked out from another unit and asked what was going on, said Ms Wu. She did not elaborate on why he was there.

Khoo told the guard that Ms Cui was his friend, sparing her from being chased away, said Ms Wu. 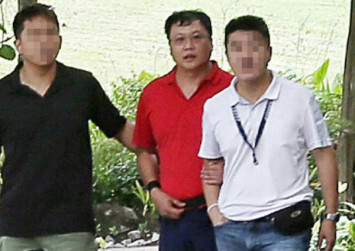 Khoo then drove her home, telling her on the way that she was a good woman and it was her ex-boyfriend's loss not to treasure her. He also asked her to be his girlfriend.

Ms Cui agreed after considering for a month, although Ms Wu said she and others cautioned her against going out with a man who would ask a stranger to be his girlfriend.

Ms Wu said Ms Cui later learnt that Khoo was not single, as he claimed, when she found an article about him and his wife on the Internet, as well as a photo of him wearing a wedding ring.

Ms Cui accepted Khoo's lie that he had been divorced for three years.

But she began to grumble that Khoo was spending the weekends in church with his "former wife" and son instead of keeping her company.

Ms Cui tried to get pregnant so that he would spend more time and energy on her. She even sought medical help in her attempts to conceive, said Ms Wu.

As it turned out, Ms Cui was just one of Khoo's many lovers that he was keeping on the side.

After he was arrested for murdering Ms Cui, other victims came forward to report that he had cheated them of their money, including two ex-lovers.

One of them, a hairdresser who got into a relationship with Khoo in October 2014, said he told her he was single and lived in Sentosa.

She borrowed $30,000 from her younger siblings to invest in his laundry business, and she trusted him as she thought it was his company.