GE2020: Cousins, a couple, and former colleagues - unexpected connections among candidates this year

SINGAPORE - When PAP new face Xie Yao Quan was introduced last week as a last-minute replacement for Mr Ivan Lim, who pulled out as a candidate after an online controversy, some netizens commented that Mr Xie, 35, bore a resemblance to Education Minister Ong Ye Kung.

As it turns out, there was some truth to the speculation. Speaking to reporters on Nomination Day (June 30), Mr Ong, 50, confirmed that he and Mr Xie, the head of healthcare redesign at Alexandra Hospital, are cousins.

Speaking in Mandarin, Mr Ong said that their mothers are sisters.

"We used to play as children, and he would call me 'kor kor'. But I've not seen him for years, save for the occasional family gathering. Now when I see him, he would call me 'minister', which is a bit awkward," he laughed.

Asked for his thoughts on Mr Xie's candidacy, Mr Ong gave his cousin this piece of advice: "Work hard... do your best, (have your) heart in the right place, be humble, show residents that you care and want to do your best to serve them."

Mr Ong's late mother was a Chinese teacher, while his late father, Mr Ong Lian Teng, was one of 13 Barisan Sosialis MPs elected in the 1963 General Election who walked out of Parliament over national service.

In response to Mr Ong's confirmation, Mr Xie on Tuesday night posted an old photo of the two of them, accompanied by the caption "Cousins".

"Minister Ong Ye Kung and I used to play as kids," he wrote. "But because we are several years apart in age, once he started work, I would remember him during family gatherings sitting in front of the TV following economic news and other serious matters, while my brother and I would play on our own.

"Since he entered politics, I have been following his work in government, in Parliament and in Sembawang. I am grateful for his advice to care and to stay humble, and I wish him all the best too," added Mr Xie.

Mr Ong and Mr Xie are not the only candidates with familial connections.

Workers' Party candidates He Ting Ru and Terence Tan, who are being fielded in the hot wards of Sengkang GRC and East Coast GRC respectively, are running in a general election for the first time as husband and wife. They got married in 2016 and have two children.

In 2015, both ran in the WP team for Marine Parade GRC that lost with 35.9 per cent of the vote against the PAP team. 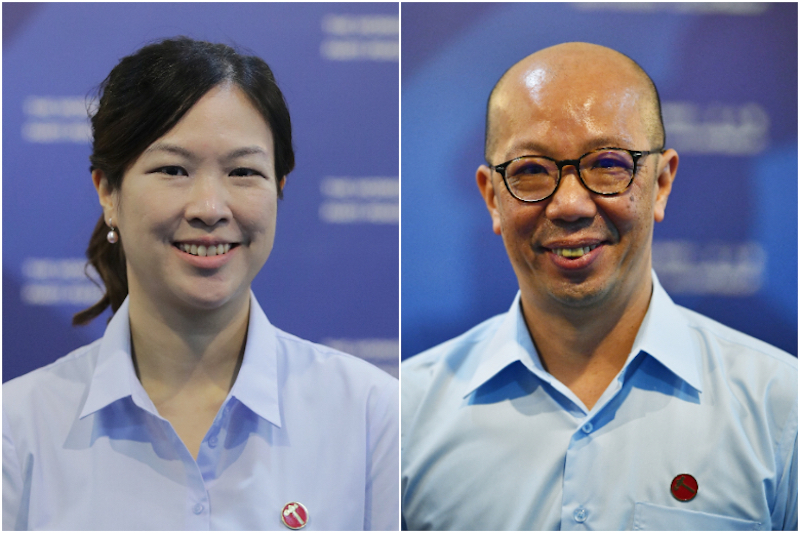 Ms He, 37, the head of legal and communications at a multinational company, said at a virtual press conference on Sunday that the decision to run in this election with Mr Tan, a 49-year-old lawyer, was not an easy one, given their new family commitments.

"When Pritam and Sylvia asked us to consider (running), we thought very hard about it... But it's something we felt that was right for us to do because we really believe that we need more and stronger alternative voices.

"At least we don't have to get into arguments around the dinner table about political views," she quipped.

The Singapore Democratic Party's Mr Benjamin Pwee on Tuesday also revealed a connection - between him and the PAP's Mr Lawrence Wong, who is National Development Minister: Both were colleagues when they were in the civil service, he wrote on Facebook. 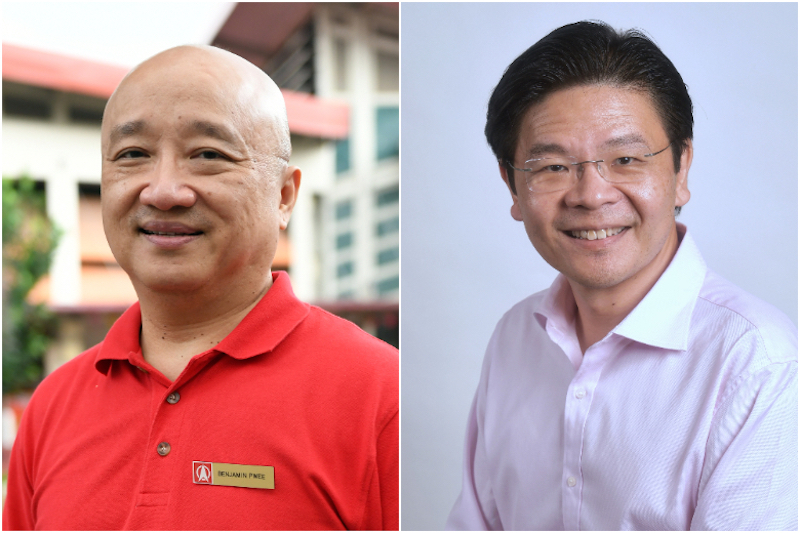 The SDP's Mr Benjamin Pwee (left) and National Development Minister Lawrence Wong were colleagues when they were in the civil service. PHOTO: The Straits Times

They are set to face off in opposing teams in Marsiling Yew-Tee GRC.

Mr Pwee sent his best wishes to his "worthy, friendly opponent, Lawrence Wong", whom he met during a walkabout in the GRC on Tuesday evening.

"We were once together in the civil service as colleagues... once upon a time when we were young. Now, we have both stepped up to serve Singapore! Here's to a great and gentlemanly contest, and may the best team win," he wrote on Facebook.