GE2020: Goh Chok Tong to retire from politics after 44 years as MP

SINGAPORE - Emeritus Senior Minister Goh Chok Tong, 79, is retiring from politics after 44 years as a Member of Parliament.

Mr Goh announced his decision in a letter to Prime Minister Lee Hsien Loong on Wednesday (June 24) and PM Lee has accepted his decision to retire from politics.

In his reply on Thursday (June 25), PM Lee thanked Mr Goh for a lifetime of distinguished service, on behalf of all Singaporeans.

The exchange of letters was released by the Prime Minister's Office on Thursday.

Mr Goh said it has been his greatest honour and privilege to have served the People's Action Party, residents of Marine Parade, as well as Singapore and Singaporeans over the past 44 years. He added that he will continue to contribute in other ways.

I saw PM yesterday to hand him my letter of retirement as MP for Marine Parade GRC. I thank PM for his understanding and...

Mr Goh, an economist by training, joined the Government's Administrative Service in 1964 and joined national shipping company Neptune Orient Lines in 1969, becoming its managing director from 1973 to 1977.

He entered politics in 1976 and was first elected to Parliament as MP for Marine Parade in the 1976 general election.

He was re-elected in nine subsequent general elections, and served as Minister for Trade and Industry, Health and Defence between 1979 and 1990. He was appointed Deputy Prime Minister in 1985, and succeeded Mr Lee Kuan Yew as Singapore's second prime minister in November 1990. 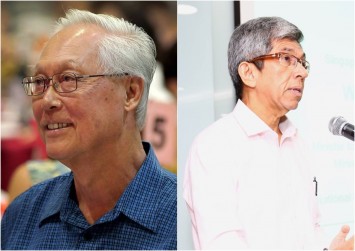 Mr Goh relinquished the post of PM in August 2004 to Mr Lee Hsien Loong, and remained in the Cabinet as Senior Minister.

He also served as chairman of the Monetary Authority of Singapore (MAS) from 2004 to 2011.

He stepped down from Cabinet alongside Minister Mentor Lee Kuan Yew after the 2011 general election, and was given the honorary title of Emeritus Senior Minister.

He was also appointed Senior Advisor to MAS.

In Marine Parade, Mr Goh will be passing the baton to Dr Tan See Leng, 55, who was introduced as a PAP candidate for the July 10 general election on Thursday morning by Deputy Prime Minister Heng Swee Keat.

Dr Tan, who was former Parkway Holdings group chief executive, is a medical practitioner with more than 30 years of experience in the healthcare industry.

Yesterday I had a good chat with a dear mentor, colleague, comrade, and friend, ESM Goh Chok Tong. We have worked...