PAP MP Murali Pillai said the timing of the post "leaves nothing to imagination".

PAP MP Murali Pillai has hit out against a "scurrilous attack" made on his family through a post about his son which he linked to the announcement of his standing for re-election.

Mr Murali, who was elected into Parliament in 2016, said the post surfaced "minutes after election has been declared in Bukit Batok SMC" on Tuesday (June 30).

Though he did not go into details, Mr Murali, 52, said in his video message to Bukit Batok residents: "My son was a victim, of a scandal. He also committed offences.

"The court has dealt with all these matters. The perpetrators behind the scandal have been dealt with.

"He himself has been dealt with and is serving sentence."

Mr Murali, a lawyer, said the timing of the post "leaves nothing to imagination".

Earlier, it was announced that Mr Murali was set for a rematch of the 2016 by-election contest he had with Dr Chee Soon Juan of the Singapore Democratic Party after the pair submitted their nomination papers.

Dear friends, I would like to share a message regarding a scurrilous attack that has just been made against my family. I...

The two candidates had contested the single-member constituency after the departure of PAP MP David Ong over allegations of an extramarital affair. Mr Murali won, securing 61.2 per cent of the vote.

Dr Chee posted a criticism of the attack on his own Facebook page, saying that while he had not seen the post, he had watched Mr Murali's "anguished response to it".

"I stand with Mr Murali on this and call on whoever who did this video to stop it and for others not to circulate it," said Dr Chee. 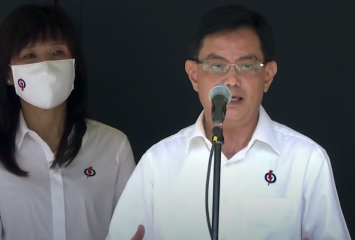 Saying "politics is about ideas on how we can make our nation better, not personal attacks like this", Dr Chee wrote: "I may disagree with Mr Murali on his political views and we can have a healthy and professional debate on them.

"But our differences must not be allowed to degenerate into unseemly smears against the candidates and their families."

Speaking to The Straits Times, Mr Murali did not elaborate on the scandal, but said he would not let personal attacks distract him from the issues that Bukit Batok residents care about.

"I am determined to continue helping Bukit Batok families to overcome the challenges that we collectively face in this present crisis," he said.

In his video on Facebook, Mr Murali acknowledged that he is not a perfect father and that all families have issues, but these issues should not be involved in politics

"Yes, I'm not a perfect father. Yes, families have issues. But no, these things should not be brought into politics.

"I'm terribly affected by this, but I will not be deterred. I will fight on."