GE2020: What do polling and counting agents actually do?

A photo taken on Sept 11, 2015, showing people waiting in line to cast their vote at Pei Chun Public School.

Political parties are calling for donations and volunteers, and if you are looking to sign up as a helper, here are some areas in which you can contribute:

The last two are quite important, but what does the work actually entail, and what's the difference between the two?

Reddit user Raistanient recently shared his experience volunteering as a polling and counting agent in Singapore's past two elections.

Polling agents are situated at the polling station during voting hours, and volunteers can opt for the morning shift, the evening shift, or the full shift.

There will be up to around five polling agents per party allowed at each station.

According to Raistanient, who was a polling agent for the Workers' Party at the Aljunied GRC in 2011, volunteers may receive a free party T-shirt and lunch.

What do you do as a polling agent?

Your role is to man the registration tables and ensure that only registered voters with a valid identification card are given a voting slip. When voting, the person must have complete privacy.

Raistanient emphasised that you have an important role to show the public that the polling station is a neutral zone. By having representatives from all contesting parties in the station, it assures people that the electoral process is fair and equal.

Volunteers can sit down during their shift and can probably bring a book to read.

In the 2015 election, Raistanient volunteered as a counting agent for the Singapore Democratic Party at the Holland-Bukit Timah GRC.

He said every party contesting in a particular constituency is entitled to have around 10 counting agents per counting centre. Parties with a bigger number of volunteers would be able to fill up the quota, but it might be harder for the smaller parties to do so.

What do you do as a counting agent?

As a counting agent, surprisingly, you don't count votes. After voting has closed, you are stationed at a designated counting centre where you watch "neutral" civil servants count the votes (no kidding).

Read Also
GE2020 explainer: When will the election results be out and how do I find out who won? 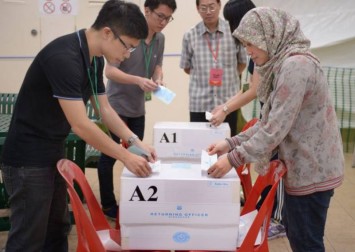 Your role is to witness the ballot boxes being unsealed and the voting slips poured onto the tables, where it would be counted.

Counting agents need to flag any problems during the counting process to the senior party representative.

Fun fact: As a counting agent, you will have "earlier access" to a small cross-section of the results.

This is referring to the results of the sample vote count, which was introduced in the 2015 election and noted to be quite accurate.

Volunteers will receive the sample count results earlier than the public as it takes some time before it is released in the news.

Other Reddit users had some questions in the comments section.

A: Arrangements would be made for you to vote.

A: If you are thinking about volunteering for either one, take into account that a counting agent's work takes place after voting hours, which means you might finish your duties around 11pm. You also need to stand and walk around to observe the counting process.

On the other hand, a polling agent's shift is either a morning shift (from the time the polling station opens until lunch time) or from lunch time to closing (around 6pm), and you can sit during your shift.