'Get out, get out!' Woman kicks valet out of car after he beats red light, almost drives through another traffic stop

One woman in Singapore gave her valet driver the boot, quite literally, after he ran a red light and didn't appear to slow down when they approached a second traffic stop.

Based on dashcam footage that the woman posted to her Facebook page, the incident occurred on Thursday evening (Sept 2) at around 11pm.

In the two short clips posted, the owner of the car, Winnie Heng, could be heard speaking to the valet after he drove through the first red light.

"Drive carefully, what are you doing," Heng chided, to which the driver mumbled an apology. Speaking in Mandarin, she continued, "You know how to drive, right?"

The valet responded in the affirmative, but went on to explain unintelligibly, "it's because the traffic light was already red", which led Heng to question why he didn't stop.

In the next clip which Heng posted, it appeared that the driver did not show signs of slowing down when approaching another traffic junction, even though the light was red.

That was when Heng went off on the man, yelling at him to get out of the car, despite the fact that they were in the second-outermost lane of the four-lane road.

Called a valet and this happened

Based on the dashcam audio, Heng could be heard getting out of the passenger seat and going over to the driver's side of the vehicle.

The video has so far amassed 93,000 views on Facebook, with many expressing their support for Heng. She is also a social media influencer with 19,000 followers on her Instagram account.

When interviewed by the Chinese evening daily, the 30-year-old said that on the night of the incident, she had gone to a gathering with friends at Tanjong Pagar.

As it was her habit to call for a valet whenever she has a drink with friends, Heng did so that night despite having only a small glass of alcohol. 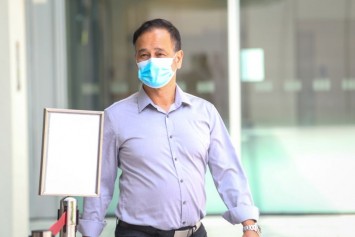 She added that as the drivers she usually calls were not free that night, the company sent over a new driver for the assignment. However, Heng observed that from the way that the man drove out from the multi-storey carpark, he "wasn't steady".

"I felt nervous and started to watch him closely," said Heng.

Heng explained that as they approached yet another traffic junction after he went through the first red light, she felt the driver speeding up instead of slowing down, so she immediately shouted at him to stop the car.

Heng told Shin Min Daily News that after he jammed on the brakes and the car came to a stop at the junction, she pulled up the handbrake and turned on the hazard lights.

From the video, Heng could be heard repeatedly yelling at the driver in Mandarin to "get out of the car". The driver profusely apologised and suggested that he drive to the side of the road, but Heng insisted that he get out.

Heng expressed that despite the danger of stopping in the middle of the road, she was afraid of getting into an accident with him driving. "I didn't dare to let him drive anymore," said Heng, who went over to the driver's door to get him to exit the car. Heng eventually drove herself home.

On her Instagram stories where she asked her followers what they would do if they were in her position, most replied that they would have done the same.

To one follower who responded that she should have asked him to stop "in a nicer way". Heng replied that she was "in shock", and had already spoken to him nicely the first time he beat the red light.

To another who commented that it was dangerous to stop in the middle of the road despite his actions, Heng replied that she agreed, but that at the time, she "didn't care anymore and just wanted him to return the car" before "running far away from him".

"If I hadn't shouted the second time, he'd have dashed through the red lights again, who knows what would've happened," she wrote. "How would I trust him to even park the car by the side," she added. 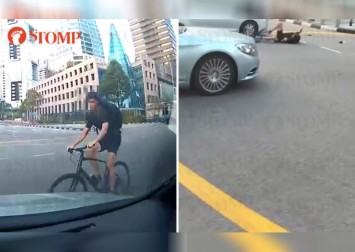 According to Heng, the driver has since been dismissed from the valet company. Based on what she was told, the 23-year-old has had a licence for five years, and drives his family's car.

Heng added that she has filed a police report as she is worried he may try to join other valet companies in Singapore.

However, Heng told the Chinese evening daily that the experience has not deterred her from calling for a valet service in the future, adding that the company she usually patronises has promised to only send her drivers that she is familiar with.

Heng also had a piece of advice for car owners who utilise valet services, and that is to always be on the alert and not be "completely drunk to the point of unconsciousness".

"It can be very dangerous as accidents can happen anytime."