An 11-year-old girl was allegedly (and figuratively) kicked to the curb by her Gojek driver after he discovered she had a pet bird with her. When her mother, Cai, called him afterwards, he hurled insults and expletives at her.

She was so upset over the experience that she lodged a police report afterwards.

The 40-year-old explained in an interview with Lianhe Zaobao that she had booked a ride through Gojek on Sunday night (Oct 13), intending to send her daughter to her grandmother's house.

She had made sure to inform the driver that her daughter would be travelling alone before seeing her off.

"When I get home, I would track the car's location through the app until she arrives safely. That day was no exception. The trip seemed normal until the doorbell rang about 10 minutes later."

According to her daughter, the driver had suddenly stopped and yelled for her to get out. Even when she tried to negotiate with the driver and asked him to send her back, he adamantly refused. Left with no other options, her daughter was forced to walk back home in the dark.

Cai elaborated that her daughter didn't have a phone or money on her and that she did not know the way home. She only managed to make it home with the help of a kind-hearted passer-by.

When she checked the app again, it showed that the car was still on its way to Sengkang and the driver had yet to cancel the trip as though absolutely nothing happened.

She believed that the driver had chased her daughter off as she had a pet bird with her. As per previous trips, the bird was kept in its cage which was carried in a bag to ensure the car would be kept clean. This was their first time encountering such an issue. 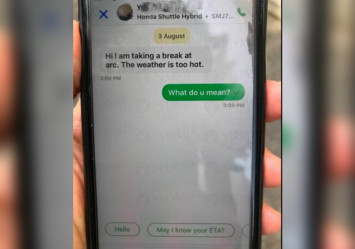 Despite calling him twice, the driver had refused to pick up or even cancel the trip. It was only after Cai left a voice message demanding an explanation that he called back, swearing and yelling at her nonstop.

"At the very least, he could have just sent her back to the pick-up point or dropped her off at the nearest safe location like a police post or a shopping mall instead of just leaving her by the road." Cai fumed.

According to Gojek's website, Gojek does not provide special pet services. Instead, passengers are advised to inform drivers beforehand. Should the driver choose not to accept the trip, Gojek would automatically match them with another driver.

Alternatively, passengers can opt for Grab's new service, GrabPet, which is specially meant for ferrying passengers with pets.

#Gojek #Children and Youth #parents #In Case You Missed It