Golden Mile Complex may stay - even with en bloc

The iconic step-terraced Golden Mile Complex building could be spared from the wrecking ball - even if it finds an en bloc buyer at its reserve price of S$800 million.

An outline application has been submitted to retain the existing 16-storey building and add a new block next to the building, subject to authorities' approval, marketing agent Edmund Tie & Company (ET&Co) revealed in its tender announcement.

"URA (Urban Redevelopment Authority) has advised that Golden Mile Complex is under conservation study and they are open for discussions to facilitate conservation," the statement said.

A URA spokesperson told The Business Times: "URA has assessed the building to have heritage value, and is in the process of engaging the stakeholders to explore options to facilitate conservation. We are unable to share further details as discussions are ongoing. 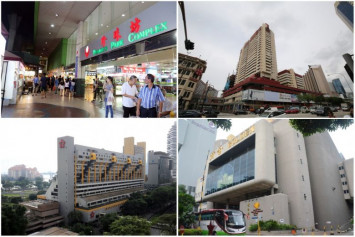 "Modern architecture, dating from our recent past, is a significant aspect of our built heritage, and we have selectively conserved a number of such buildings. Where there is strong support and merits for conservation, we will work with the relevant stakeholders to facilitate the process."

DP Architects (formerly known as Design Partnership), who designed Golden Mile Complex in the 1960s as one of the first Government Land Sale (GLS) sites, has been appointed by the collective sale committee as consultant architect for the development.

The proposed plan for Golden Mile Complex comes amid debate about the importance of several post-independence landmarks like People's Park Complex and People's Park Centre to public memory amid the en bloc fervour.

The Beach Road commercial property has a land area of approximately 1.3 hectares and is zoned for commercial use.

The differential premium and lease upgrading premium to intensify the land use and to top up the lease to 99 years respectively will depend on the developer's proposed land use mix.

The tender exercise will close on Jan 30, 2019, and ET&Co said the longer tender process is to allow interested parties to carry out a detailed study.

"The new Golden Mile Complex will be an essential part of the rejuvenation of the Beach Road corridor and we are working closely with DP Architects and URA on the conservation of the building and further ways to enhance its potential."

Chan Hui Min, director of DP Architects, said: "Many successful developments that integrate older buildings not only manage to optimise the land use efficiency, but also leverage on the history of the site to bring value to the sense of place and identity of the development."

She added: "We can create win-win situations with sensitive adaptive reuse."

Golden Mile Complex has 718 strata lots in all, comprising 418 shops, 227 offices and 68 residential units. Five hundred carpark spaces occupy another four other strata lots, and there is also one swimming pool.

Golden Mile Complex was completed in 1973, at a cost of S$18 million, designed in the Brutalist style. It became known as "Little Thailand" especially in the 1980s, due to the large crowds of Thai nationals working here in construction who used to gather there. Its previous collective sale attempt was in 2010.