SINGAPORE - An officer from a government agency was fined $3,000 for molesting his colleague at their workplace.

The 46-year-old, who cannot be named due to a gag order, pleaded guilty to one count of molestation on Monday (March 8).

On June 28 last year at about 6pm, the accused told the victim, who is in her 20s, to go with him to the break room at their workplace as he had something important to tell her.

When they were there, he asked her why she had made him think of her every night, making it difficult for him to sleep. She was puzzled and asked him what she had done.

He then wrapped his arms around her waist and hugged her. Thinking it was a friendly hug, the victim hugged him back.

But the man then asked her for a kiss. She immediately refused, pushing him away, but he continued to hold her waist with one arm.

He then used his other hand to hold her face, again asking her to kiss him.

When she rejected him again, he tapped and squeezed her buttocks before letting her go.

The woman was shocked and scared, and made a police report about a month later. 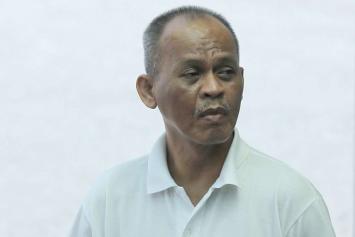 Deputy Public Prosecutor Bjorn Tan asked that the court issue a fine as the act was fleeting.

District Judge Eddy Tham noted that there was "kind of consent" in relation to the hugging, but the victim had clearly not consented to further acts of intimacy.

He said: "I hope (the accused) learns from this not to repeat such an act in the future."

The Straits Times has contacted the government agency for comment on the man's employment status.

For molestation, the man could have been jailed for up to two years and caned, on top of the fine.