We're well into 2020 but one Grab driver seems to be living in the last century — at least according to her archaic standards of how a couple should behave.

Disgruntled passenger Kohji Toh, 31, took to Facebook on Jan 15 to recount his bizarre experience onboard a Grab ride where the driver accused him and his wife of being intimate after she leaned on his shoulder, even going so far as to call the police.

According to Toh, he and his wife were on a GrabCar heading to an appointment at Defu Lane when his wife suddenly felt unwell.

His wife, who was suffering from a headache at the time, wanted to hug his arm and lean on his shoulder. But the driver had other ideas.

Warning the couple to "behave", she requested for Toh to switch seats so that he would be separated from his wife.

"I told her this is my wife and we are legally married so what's wrong for her to hug my arm and sleep on my shoulder," he wrote. "She still have the cheek to tell me this against the law and that she can call police for this [sic]."

When Toh told her to "go ahead", the driver proceeded to call the police and drive to the nearest police station — but not before losing her way.

With the help of a police car, they eventually made it to the station where they were told that Toh and his wife had done nothing wrong. 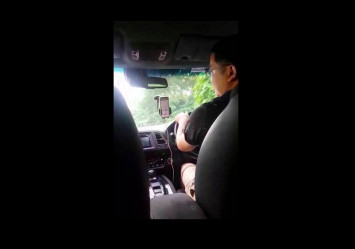 But by this time, Toh and his wife had missed their 5.30pm appointment.

Under the Public Order and Nuisance Act, nudity is prohibited in public places and punishable with fines up to $2,000 or imprisonment up to three months. However, other acts such as kissing or hugging are not punishable.

Toh said that he has reported the matter to Grab and is considering civil action against the driver.

According to Grab's code of conduct, drivers should avoid aggressive behaviour, which includes engaging in verbal disputes with passengers.

Drivers who violate the code of conduct may face penalties including suspension, fines or a permanent ban.

A Grab spokesperson told AsiaOne that they are aware of the incident and investigations are ongoing. They also encourage all users on the platform to "treat one another with respect and kindness".

#Grab #Ride-hailing services #In Case You Missed It