In a dance battle between a "13-year-old awkward teenager" and a "76-year-old hipster grandpa", who will emerge victorious? The result may not be what you think.

Ang King Tik stumbled upon social dancing in his younger days and has since fallen in love with the sport. His romance with dance lasted over five decades.

Upon retiring from his construction business, Mr Ang dedicated most of his time to participating in dance competitions and won several awards.

Today, Mr Ang is known as the "Dancing King" among his peers and has a knack in Disco and Rock 'n' Roll. He said, "Every week I spend around three to four days, up to four hours each time, on dancing. I never felt tired. Instead, the more I dance, the more energised I become." 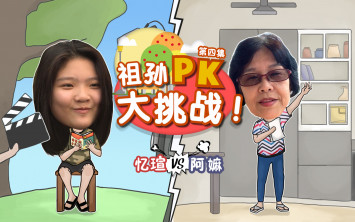 But his grandson, Nathaniel Hsiao Chi Ping, has never seen him danced. To him, grandpa is more of a "Fruit King" rather than "Dancing King".

When Nathaniel was young, grandpa would always visit with a big bag of fruits. Nathaniel recalled, "I remember only eating grandpa's apples when I was young. Because they were always fresh and juicy!"

It was only after Nathaniel grew up that he discovered grandpa kept the rotten apples for himself and gave him the better ones.

Despite their busy schedules, the grandpa-grandson pair would meet up for a meal or to play sports every fortnight.

As a former school team volleyball player, Nathaniel has a flair in ball games. To him, grandpa "has the stamina of a young person", but grandpa concedes that "he cannot catch up with his grandson in terms of speed".

In the final episode of "The Grand Challenge", Nathaniel will coach grandpa on playing badminton, while Grandpa Ang will teach his grandson how to sashay and flaunt his charisma through disco dancing.

Will the awkward teen be able to overcome his psychological barrier and unleash his inner diva? Can "Dancing King" grandpa transform into a badminton athlete? Watch to find out.

About "The Grand Challenge"

"The Grand Challenge" is a 5-part series, with each episode featuring a grandchild-grandparent pair tasked to learn a skill from each other in 10 days. They will then face-off in a "duel" and family members decide the winner by voting.

The gameshow-like format seeks to explore the inter-generational dynamics and foster bonding in the process, and promises to bring audience on a heartwarming, fun-filled journey. All episodes come with Chinese and English subtitles.

Viewers can also vote for their favourite pair of contestants and stand to win attractive prizes here.