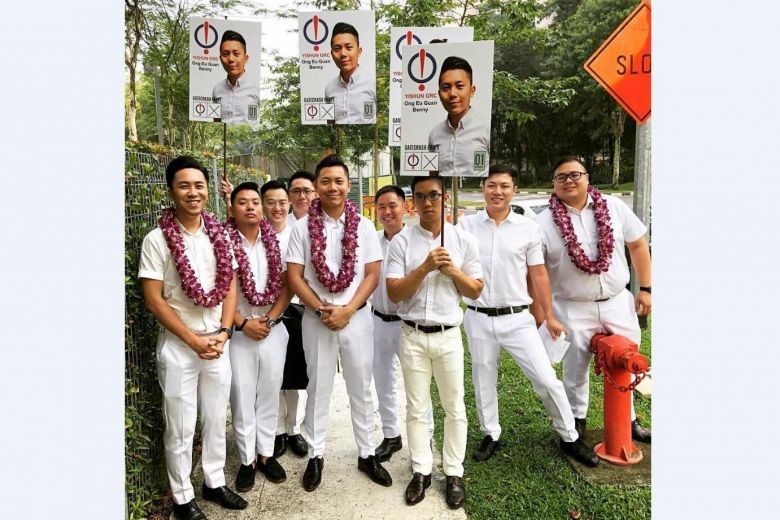 SINGAPORE - The groom in online photos of a wedding gatecrash party, whose members resemble People's Action Party (PAP) election candidates, said the idea behind their white outfits was floated by friends familiar with his penchant for expressing his opinions.

Entrepreneur Benny Ong, 32, told The Straits Times on Sunday (Oct 28): "My friends know me for being an authoritative and opinionated person, and that I am interested to be a Nominated Member of Parliament.

"Logistically, (the attire) was not difficult to pull it off... My wife and I thought it sounded cool and that it would be fun." His bride is business owner Rachel Tan, 27.

A photo of Mr Ong's Canberra gatecrash party in the Yishun-Sembawang area was posted by him on Facebook on Friday. It shows him and eight of his friends dressed in white short-sleeved shirts and pants. Some of them, including Mr Ong, wear flower garlands. Several members in the group also carry signboards that mimic election campaign posters, bearing a logo consisting of a circle and an exclamation mark in a colour scheme similar to the PAP logo.

A gatecrash party refers to a pre-wedding event in which the groom and groomsmen participate in a series of challenges set out by the bridesmaids. The men will have to complete the challenges before the groom gets to see the bride.

Mr Ong said that his friends came up with the idea for the gatecrash party theme about a month ago. The outfits and mock campaign posters were prepared in the two days before his wedding on Friday.

He said that the signboards' logo - designed using Microsoft Power Point - was different from the PAP logo as he did not want to accidentally infringe on the rights for the original logo.

The entrepreneur said he is particularly interested in becoming a voice for the education system, should an opportunity arise for him to become an NMP when he is "much older".

A person is qualified for appointment as an NMP if he or she is Singaporean, aged 21 or above and on the current register of electors.

Among other requirements, he or she should also be able to take an active part in Parliament proceedings, to speak and, unless unable to due to blindness or other physical cause, to read and write at least one of the official languages: English, Malay, Mandarin or Tamil.

The NMP scheme was introduced in 1990 to provide alternative voices in Parliament, with the public and seven groups invited to propose names of suitable candidates. These groups are business and industry; the professions; the labour movement; social service organisations; the civic and people sector; tertiary education institutions; and the arts, media and sports.

Besides getting the attention of netizens, Mr Ong's gatecrash party photo also attracted comments from Nee Soon GRC MPs K. Shanmugam and Louis Ng, who both congratulated him on Facebook.

Mr Shanmugam, who is Minister for Law and Home Affairs, said in his post: "I am always looking out for people to help in our work in Nee Soon. Good to find so many new potential recruits! Best wishes, heartiest congratulations on your wedding."

Mr Ong said he was shocked when he saw Mr Shanmugam's post, as he did not expect to get the attention of a minister.

"I didn't want to get myself into trouble, so it is nice to see people in the Government thinking that it is a joke... It's good to see that they are open-minded."

While Mr Ong's wedding events, which took place on Friday and Saturday, went well, he has a lingering regret.

"By the time we thought of the gatecrash idea for the groomsmen, the bridesmaids had already bought their dresses," he said.

"If we had thought of it earlier, we would have asked the bridesmaids to be dressed in blue and to carry hammers," he added, referring to the colour and symbol of the opposition Workers’ Party.