The Housing and Development Board (HDB) and Public Utilities Board (PUB) have responded to a woman's complaints of water supply to her Bedok flat being contaminated and affecting her family's quality of life.

Geraldine Tang shared with Stomp the issues she has been facing since 2015 when she moved into her Design, Build and Sell Scheme (DBSS) flat at Belvia in Bedok Reservoir.

Tang, who is in her early 60s, listed them in a Facebook post she published on July 4.

Describing the problems as "impossible", she said that her bathrooms are smelly and invaded by "sewage and foul odours" from her neighbours. 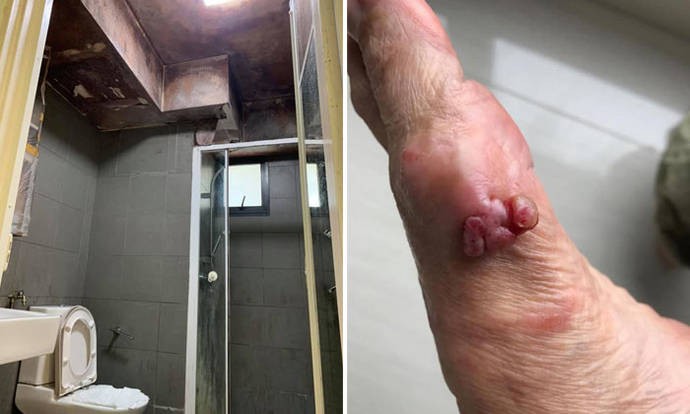 She shared photos of stains on the walls of her flat and said that their feet itch due to "microbial debris" on the floor.

Tang alleged that the bathrooms turn into "saunas" when her neighbours take hot showers and that they have a "hot toilet bowl" because heat rises from there.

She also shared that there is "bacteria" in her tap water making it unusable and that her family fear suffering skin and urinary infections from contact with the water.

To "survive", she said the family buys 20 to 30 bottles of water for drinking, cooking and rewashing themselves in case they come in contact with any bacteria.

The PUB responded to Tang's post in a statement on its Facebook page on July 14 at 12pm.

In the statement, PUB said it has been attending to the resident's feedback on water issues at three different residences since 2013.

PUB said they have collected water samples for testing each time and found that the water quality is satisfactory and safe for drinking.

It also found no service pipe leak within her premises.

We are aware of a post by Ms Geraldine Tang who has alleged that her tap water is contaminated by bacteria especially...

HDB released a statement shortly after PUB's saying it is aware of the online discussions regarding Tang's post.

The statement said her allegations that government agencies did not take action to address the issues within her flat are untrue.

"Multiple site inspections have been carried out since Ms Tang first reported her issues in 2015," the statement said.

"The investigations revealed no defects in the sewage system or other areas, which could possibly cause the alleged foul smell within the flat."

"PUB had also tested water samples from her flat, which showed that the water is safe for drinking."

HDB added an Indoor Air Quality specialist reported the windows and doors in the flat were constantly closed resulting in poor ventilation as well as high temperature and humidity within the flat.

Multiple cleaning chemicals were also found to have been used to disinfect the floor and walls of the flat.

The specialist concluded the microbial growth within the flat is likely a result of the poor ventilation and excessive washing over time.

"Ms Tang, however, did not heed the advice of the specialist to ventilate the flat," the HDB said.

The agency added they have not received any similar feedback from other residents in her precinct.

We are aware of online discussions regarding alleged leaks within a DBSS flat, which the owner claims resulted in odours...