SINGAPORE - A Housing Board flat owner who had converted the doorstep of his property into a fish tank for his koi carp has failed in his appeal to keep the unusual structure.

The Tampines Street 41 resident installed glass panels to the walls around the four steps leading to his ground floor flat to house around a dozen pet fish, but was not aware that he needed permission to make the alteration.

He declined to be named when approached by The Straits Times previously.

The Housing and Development Board (HDB) said in January that the man could not keep the tank due to safety concerns.

But he later appealed the decision, after working with Tampines Town Council on measures to address issues raised by HDB.

The HDB said on Tuesday (April 9) that it had rejected the man's appeal.

In response to queries from ST, an HDB spokesman said: "Aside from the safety concerns that were earlier highlighted, there is a more fundamental reason to turn down the request to retain the koi tank.

"The stairway area outside the unit is common property... Any fixed installations by flat owners have to be confined within the premises of their unit, and not placed on common property."

The owner has also acknowledged that the stairway is common property, the spokesman added.

Under the Town Council's by-laws, it is an offence to have unauthorised fixtures on common property.

HDB also said it has informed the Town Council and the flat owner of the decision.

The flat's fish-loving residents also own the adjacent flat, through which they enter the unit with the blocked doorstep. 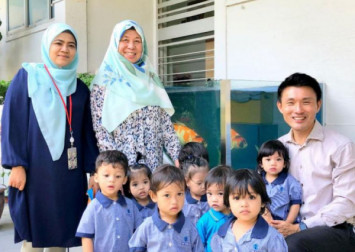 Last August, neighbours said the tank was installed around three years earlier with one resident describing it as "unique and nice".

When ST visited the unit in January, the owner was adamant that the space was his private landing and that he should be allowed to keep the tank.

"It doesn't cause any obstruction to people and the laws should be applied on a case-by-case basis," he said. "If I go to any other unit, I will also find broken laws, such as plants on the stairs."

He said the tank has helped bring the community together, with visitors coming from as far as Jurong and Bukit Batok to view it.

"If I start a petition (to keep the tank), I think people will surely sign it," the owner added.

He had kept koi in normal tanks in the past, but as they grew bigger, he decided to build the tank on the steps. A contractor friend helped him to build it about two to three years ago.

Tampines GRC Member of Parliament Baey Yam Keng previously said he hoped the tank could be retained, as it had lasted without problems so far and was accepted by the community.