People praying outside the Kwan Im Thong Hood Cho Temple Waterloo Street on Sept 27, 2021. The latest Covid-19 restrictions aim to slow the pace at which cases are rising.

These measures, which aim to slow the pace at which cases are rising, will give Singapore time to build up its healthcare capacity - including facilities outside hospitals - so that it can cope with 5,000 or more cases a day.

"We felt that we had to do it because our healthcare system and our healthcare workers are truly facing tremendous pressures and stresses during this latest wave of cases."

The latest restrictions on social gatherings kicked in on Monday - one day after Singapore reported nearly 2,000 new cases - and are set to last a month. Under the new rules, people are not allowed to gather in groups larger than two, and working from home is once again the default.

In his interview, Mr Wong broke down how this surge could stress Singapore's hospital system, even if only 0.2 per cent of patients end up requiring intensive care.

In order to ensure this small group receives timely care, hospitals need to admit about 10 per cent of infected patients for closer monitoring. These include people who are older, have multiple health conditions or more serious Covid-19 symptoms.

The country is working to ramp up medical facilities - including recovery centres for mildly ill patients who may need more supervision - as well as equipment and manpower to manage such a surge, he added.

In the interview, Bloomberg's Haslinda Amin suggested there is a sense that Singapore's leadership holds conflicting views over how the country should handle its reopening. 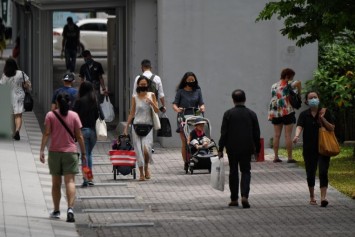 Mr Wong, who co-chairs the multi-ministerial task force tackling the pandemic, responded that the latest decision to tighten restrictions was made collectively.

"We did not make it lightly," he said. "When we looked at the data and the evidence together with our medical experts, we just felt that there was a huge risk of the healthcare system becoming overwhelmed, and we have to protect the healthcare system. And that is why we made the decision we did."

Would doing so impact the people's trust in the Government? Mr Wong replied that he and his colleagues do not take this trust lightly.

In this situation, they had no choice but to tighten measures, he added. "We seek everyone's understanding, support and forbearance for the measures, and we hope everyone can rise in solidarity with our healthcare workers who are facing a lot of pressures - working flat out in the recent weeks to deal with the huge surge in cases."

The interview also covered Mr Wong's take on Singapore's economic situation and growth prospects, with Ms Amin asking if the Government would consider dipping into the country's reserves again.

As at July this year, Singapore has drawn a total of $53.7 billion from the reserves for this and the last financial years to fund Covid-19 support measures.

"The Government will not hesitate to use the full measure of our fiscal power, including our reserves, should the need arise," Mr Wong replied. This would happen in an "emergency scenario" where the economy begins to go into a recession.

But if the country is able to continue with its reopening plans - hitting its expected gross domestic product growth forecast of 6 to 7 per cent - it should live within its means as much as possible, he said.

"I think that is a fair and responsible way of managing our fiscal balances, and a judicious way of balancing between the needs of present and future generations."

Ms Amin asked if the continued restrictions on social gatherings could jeopardise Singapore's growth, to which Mr Wong said he believes growth is still achievable.

More than 70 per cent of Singapore's economic sectors are outward facing - meaning that the key is not domestic but external demand. As long as external demand in the major economies remains strong, the country's forecast should hold true, he added.

When queried on whether Singapore could see the introduction of a wealth tax in next year's Budget, Mr Wong replied that the Finance Minister never rules out any options. The country already has a wealth tax in the form of property tax, he added. 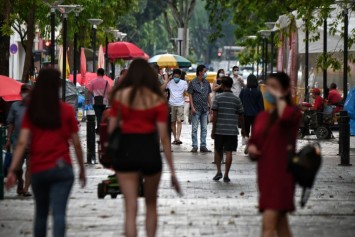 Ms Amin then asked about the Government's considerations in deciding whether or not to introduce new ways of taxing wealth.

Within this revenue system, the Government will have to make sure that the overall taxation system is fair and progressive, and that those with the means are able to pay more.

"Any form of wealth tax will fit into that broader system," Mr Wong said.