(From left) Finance Minister Heng Swee Keat will become Deputy Prime Minister from May 1, 2019, while both existing DPMs - Mr Teo Chee Hean and Mr Tharman Shanmugaratnam - will relinquish their appointments.

SINGAPORE - Finance Minister Heng Swee Keat will become Deputy Prime Minister from May 1, in a move that cements his standing as Singapore's next prime minister.

They will be appointed Senior Ministers and remain in Cabinet. 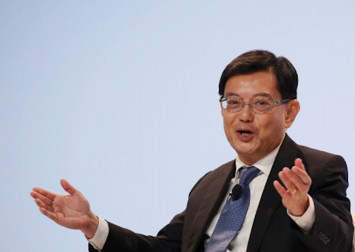 He wrote: “The next generation leadership is taking shape, and progressively taking over from me and my older colleagues. The team is working closely together, building up public trust and confidence in their leadership."

“I ask all Singaporeans to support them, and work together to secure a bright future for Singapore,” he added.

As part of the ongoing leadership renewal, Heng Swee Keat will be promoted to Deputy Prime Minister with effect from 1...

On Monday, GIC also announced that Mr Tharman, who is now GIC director, will be appointed deputy chairman from May 1.

As deputy chairman, he will assist PM Lee, who is GIC chairman, to lead the board in overseeing GIC’s long-term asset allocation and portfolio performance, said the statement. Mr Tharman has been a GIC director and chairman of the Investment Strategies Committee since May 2004 and July 2011 respectively. He is also chairman of the Monetary Authority of Singapore.

Mr Heng had been set to be appointed deputy prime minister in the reshuffle, after he was picked in November as the ruling People's Action Party's (PAP) first assistant secretary-general.

These changes come a year after a major reshuffle announced last April, which saw the younger ministers taking on heavier responsibilities in 10 out of 16 ministries helmed by fourth-generation ministers.

PM Lee had given an indication last December that the Cabinet would be reshuffled some time after this year's Budget debate, which ended last month.

He has said that he plans to step down some time after the next general election, which must be held by April 2021.

The latest reshuffle is the fourth since the last general election on Sept 11, 2015, and will probably be the last before the next election.