Lawyer M. Ravi at the State Courts on Oct 27, 2020. The 13 bus drivers are seeking a refund of balance fees they had paid Mr Ravi.

SINGAPORE - The 13 bus drivers suing transport operator SBS Transit have discharged their lawyer M. Ravi and are seeking a refund of balance fees they had paid him using crowdfunding.

In a statement on Tuesday (Nov 23), the lead plaintiff in the case, Mr Chua Qwong Meng, said the drivers were "very embarrassed" by Mr Ravi's behaviour towards Justice Audrey Lim and SBS Transit's lawyer, Senior Counsel Davinder Singh, during a hearing into the case on Monday.

Mr Ravi had accused Justice Lim of being biased and demanded that she recuse herself from hearing the case.

He also called Mr Singh a "clown" while they were discussing administrative matters.

The proceedings were held via videoconference.

"We do not condone Mr Ravi's behaviour at all and what he displayed yesterday was a total shock to us, who had put our trust in him. He has let us down very badly and hurt our case immeasurably," Mr Chua said in his statement.

He added that the drivers have so far paid Mr Ravi more than $55,000 to represent them. This money was raised through public donations.

During the hearing on Monday, Mr Ravi had also claimed there was a breach of the right to a fair trial and that his client "doesn't have faith in the system". He also said the drivers did not want to participate any more in "these unlawful proceedings".

Mr Chua said on Tuesday: "There is no truth whatsoever to Mr Ravi's allegation, which he made yesterday, that we have no faith in the Singapore judicial system and that we do not intend to proceed with the case."

The drivers have informed the court that they intend to proceed with the litigation and are now looking for a new lawyer to represent them, Mr Chua added.

The lawsuit arose after a dispute between the bus drivers and the operator over overtime pay and working hours.

The case centres on the interpretation of provisions in the Employment Act relating to whether a rest day can be scheduled such that an employee can be made to work for 12 consecutive days over a 14-day period and whether bus drivers fall within the definition of employees providing "essential services". 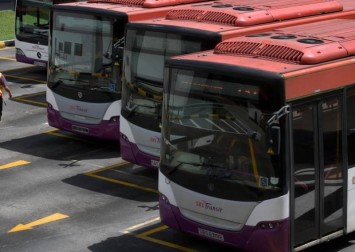 The 13 workers, who filed suits in 2019 and last year against SBS Transit, claim that they had been made to work without a rest day each week and that they were also underpaid for overtime work.

In June, Justice Lim said the case involved important questions of law that would affect a larger class of workers in Singapore, and allowed the case to be transferred to be heard in the High Court.

Justice Lim said there would be potential ramifications on how such employment contracts are structured in terms of granting days off, computing overtime pay and determining work hours.

Mr Chua's suit is being heard as a test case. This means the court's decision and findings on Mr Chua's suit will be binding on all the plaintiffs.

In a letter to the Supreme Court on Monday seen by The Straits Times, Mr Chua requested for proceedings to be adjourned until a new lawyer is appointed. He also said he would not proceed with any application for Justice Lim's recusal.

Mr Chua has also asked Mr Ravi to hand over all relevant documents relating to the case by Nov 29 and for a full statement of payments made.

"I reserve the right to lodge a complaint to the Law Society regarding this matter," Mr Chua said in a letter to Mr Ravi.