He pressed Non-Constituency MP (NCMP) Leong Mun Wai on several points about the PSP's motion on foreign talent and policy during a robust hour-long exchange, including his stance on free trade agreements (FTAs) and the terms of the Singapore-India Comprehensive Economic Cooperation Agreement (Ceca).

Mr Shanmugam said the motion's words made it clear that Mr Leong and his party were race-baiting and nationality-baiting.

"Mr Leong's views have been so completely distorted by his lack of understanding of Ceca and his eagerness to attack Indians and Ceca. And I would say what his party and Mr Leong are doing is one of the worst types of political opportunism - using race as a bait," he said.

The motion filed by Mr Leong stated: "That this Parliament calls upon the Government to take urgent and concrete action to address the widespread anxiety among Singaporeans on jobs and livelihood caused by the foreign talent policy and the 'movement of natural persons' provisions in some free trade agreements like the Ceca."

Zooming in on the term "provisions", Mr Shanmugam repeatedly asked Mr Leong if he would accept that there is nothing in Ceca that allows for free movement of Indians into Singapore. 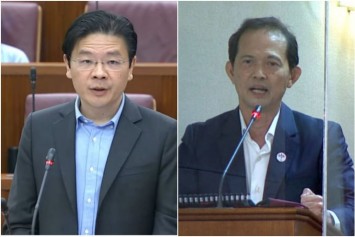 In response, Mr Leong sought more data on foreign nationals coming into Singapore, and insisted the party was not arguing about a legal document but the economic effects of the trade pact.

Pressed on whether he had any basis to challenge the provisions in Ceca, Mr Leong asked if he could get his fellow PSP NCMP Hazel Poa to answer those questions, and looked at his mobile phone.

Mr Leong later said he did not have a legal opinion on the provisions in Ceca.

Mr Shanmugam then concluded that despite the wording of his motion, Mr Leong had no understanding of the provisions of Ceca.

The minister also asked if Ceca had a "special place in Mr Leong's affection and mind" or if he treated it the same as other FTAs.

Mr Leong replied that he and his party wanted to obtain more data on Ceca from the Government, and pointed out that his motion had also mentioned "some free trade agreements" as well.

When asked to provide examples of other FTAs he was concerned about, Mr Leong said they included pacts with China, the United States and Australia. Mr Shanmugam said this showed that Mr Leong was equally concerned about multiple FTAs, and was not singling out Ceca.

Mr Leong had earlier confirmed that he and PSP supported Ceca and free trade agreements in general, after being pressed on this by Mr Shanmugam. 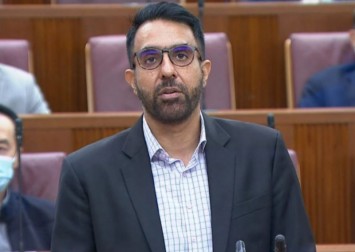 The minister also put it to Mr Leong that past statements about Ceca by him and PSP could have been interpreted as racist, noting that some of his party's own members have made the same observation.

He asked if Mr Leong would accept that such statements could be seen as racist by other Singaporeans.

Mr Leong eventually conceded that "there will be some people who would think that there is racial undertone".

Mr Shanmugam also brought up Mr Leong's remarks in Parliament last year on how he was "deeply disappointed" that DBS did not have a home-grown chief executive 22 years after former JP Morgan executive John Olds was made chief executive of the local bank.

The current DBS CEO, Mr Piyush Gupta, was born in India and became a Singaporean.

The minister stressed that it is wrong to take issue with new citizens and permanent residents from specific countries "because it is quite clear what Mr Leong and PSP were doing".

After getting Mr Leong to accept that Singapore needs some foreign professionals, managers, executives and technicians (PMETs) to drive its economy, Mr Shanmugam grilled the NCMP on the right number of these workers.

Singapore currently has about 350,000 foreign PMETs.

Mr Leong said this would depend on the Government's estimate of how many Singaporeans are being displaced.

"At this moment, I will need more data from the Government, before I can come up with an accurate number," he added.